“On November 20, blockades will be set up to show the Mexican government we mean business. We are calling upon YOU to join in these blockades. That could mean blockading the consulates’ websites, jamming their phone lines with calls about the conflict in Oaxaca, occupying the offices of the consuls, or shutting down the roads around the consulates in whatever way you see fit.” – EZLN 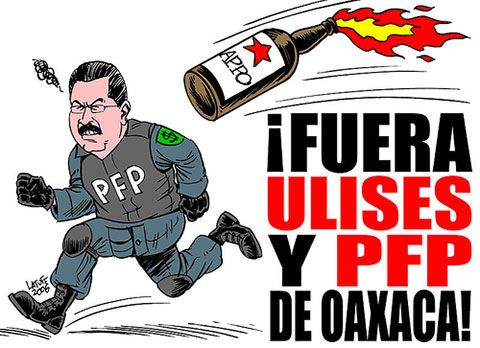 Solidarity Demonstrations in the US on Monday, November 20th

Philadelphia: 4:00pm Protest at the Mexican Consulate (5th and Market)

Pittsburgh: 8:00pm Potluck and Party to celebrate the return of two POGers (Belvedere’s in Lawrenceville)

Worldwide Direct Action in Support of Oaxaca on November 20

On October 27, paramilitaries in Oaxaca, Mexico murdered Indymedia journalist Brad Will. He is one of dozens who have lost their lives at the hands of pro-government forces while participating in the largely nonviolent resistance to government oppression in that region. Mexican president Vicente Fox used Brad’s death as a pretext to send 4,000 federal police into the city of Oaxaca; these forces are systematically brutalizing the population.

The people of Oaxaca have not backed down – through days of courageous fighting, they have managed to protect their radio station at the university, repelling machine gun wielding armored police with only sticks, stones, and hope. On November 5, tens of thousands marched through the streets of Oaxaca, calling for the federal police to leave.

The only reason that hundreds more have not yet been killed in Oaxaca is that the Mexican government fears the response that would engender in Mexico and across the world. Those who have organized solidarity demonstrations at Mexican consulates can congratulate themselves on helping, however slightly, to deter the Mexican government from ordering a bloodbath.

That bloodbath will still take place, however, unless we continue to escalate the pressure upon President Fox’s government to withdraw federal forces from Oaxaca. The EZLN has announced that it will help coordinate a nationwide shut-down on November 20. This must be matched with international actions to show that the world has not taken its eyes off Oaxaca, that on the contrary, the mobilization in support of those who struggle there is only gathering momentum.

On November 20, blockades will be set up to show the Mexican government we mean business. We are calling upon YOU to join in these blockades. That could mean blockading the consulates’ websites, jamming their phone lines with calls about the conflict in Oaxaca, occupying the offices of the consuls, or shutting down the roads around the consulates in whatever way you see fit.

Actions are already being planned in cities around the US. Please plan actions in yours.

13 replies on “Oaxaca Solidarity Demonstrations in the US on Monday, November 20th”

In Austin there going to be a protest in the Mexican Consulate at 11 am this monday November 20 2006,to support the people from Oaxaca,Atenco and all around the world!!!

Also in Tucson on Nov. 20, an educational forum on Oaxaca sponsored by “Voices of Opposition”

Activists hung a 20-foot banner across the main street in of the capitol city of Vermont and handed out informational flyers and talked to passersby.

A banner with the same slogan was also hung in Vermont’s most populace city, Burlington, at noon time as well.

The flyers contained the following text:

Every year since 1980, Section 22 of the National Teachers’ Union (SNTE) has symbolically occupied Oaxaca’s historic town square for a week or two, demanding more funding for the educational needs of one of the poorest states in Mexico. But on June 14, 2006, for the first time in the 26-year history of the teachers’ movement, recently elected Governor Ulises Ruíz Ortiz of the Institutional Revolutionary Party sent over 1,000 state police to lift the teachers’ improvised tent city. The police stormed the sleeping teachers at 4 a.m., shooting tear gas grenades from helicopters and brutally beating men, women, and children with their truncheons. The police, however, did not do their math: the teachers’ union has 70,000 members, some 30,000 of whom were in Oaxaca for the protests. Within hours of the raid, teachers and outraged local citizens took to the streets, and by midday they had evicted the police.

Since the attack on teachers by the police, Oaxaca has been in a state of civil rebellion. On June 17, the Popular Assembly of the People of Oaxaca (APPO) formed, calling itself the governing body of Oaxaca and convening representatives of Oaxaca’s state regions and municipalities, unions, nongovernmental organizations, social organizations, cooperatives, and parents. APPO urged everyone to organize popular face-to-face assemblies at every level—neighborhoods, street blocks, unions, and towns, declaring: “No leader is going to solve our problems.” And so throughout the summer and fall, the teachers and hundreds grouped into APPO waged an increasingly intensive campaign of mass, coordinated civil disobedience aimed at paralyzing the state government and forcing the resignation of Ruíz Ortiz. They canceled the state’s largest tourism event, the Guelaguetza, blockaded all major state government buildings, including the capitol, forced Ruíz Ortiz and other state officials underground, and took over the state television and radio station.

The teachers of SNTE’s Section 22 agreed by majority vote to return to classes on October 30 based on an implicit guarantee of their principal demands: the governor’s resignation, and the transformation of their pay scale so as to raise their wages and benefits to the level of Mexico City teachers. But on October 27, paramilitaries in Oaxaca murdered NYC Indymedia journalist Brad Will. He was only one of dozens who have lost their lives at the hands of pro-government forces while participating in the largely nonviolent resistance, and many others have been arrested or “disappeared.” Nevertheless, Mexican president Vicente Fox used Brad’s death as a pretext to send 4,000 federal police into the city. These forces are now brutalizing the population and attempting to crush the grassroots movement. The only reason that hundreds more have not yet been killed is that the Mexican government fears the response domestically and internationally.

“Not One Step Backwards! Forever, until Victory!”
—Popular Assembly of the People of Oaxaca

In solidarity, the Zapatistas have called for a Mexico-wide general strike and road blockades on November 20. They also encourage everyone around the world to show their support by taking action on the same day. We support the struggle for autonomy, dignity, and justice in Oaxaca, and the demands of the people of Oaxaca and APPO:

• Ulises Ruíz out of Oaxaca
• Immediate withdrawal of the occupying federal force from Oaxaca
• Immediate and unconditional freedom for all detainees
• Cancel all arrest warrants
• Punish the murderers
• Justice, freedom, and democracy!

What You Can Do TODAY!

1. Call, e-mail, or fax the Mexican Consulate today, and let them know you are paying attention to the repression of one of the most truly democratic representations of the will of the people in the Western hemisphere:

2. Educate yourself and keep up-to-date about the directly democratic social movement in Oaxaca and APPO, and let others know what’s going on. Some good resources are:

3. Join central Vermonters at 7 p.m. tonight, November 20, for a discussion about Oaxaca and APPO at the Langdon Street Café, 4 Langdon Street, Montpelier

Greensboro, North Carolina will be hosting a teach-in all day at the corner of Market & Eugene. A candlelight vigil tonight will be followed by a screening of this film at the Green Bean Coffeeshop on Elm St.

At approximately 8:30 this morning a banner was dropped by a gang of hooligans known only as Emil Minty and the Lost Girls and Boys. The banner read “Troops out of Oaxaca now, indymedia.org.” This action was one of many taking place today all over the world in solidarity with the battles against neo-colonialism currently waged in the Mexican state of Oaxaca.

The people of Oaxaca demand merely free elections and control over their own lives. In return Vincente Fox has responded by sending federal troops to silence the popular rebellion.

The banner dropping gang supports the people of Mexico and oppose. any attempt by Fox or the state’s governor Ulises Ruiz to stop this movement. This action shows Milwaukee is in solidarity with the Oaxacan teacher’s union, the APPO, and the people everywhere who have lived and died fighting to end oppression.

Ever get the feeling that being in the US means we’re stuck in the boonies, while the real earth-shaking events are going on elsewhere? Which brings me to Oaxaca.
amptoons.com/blog/archives/2006/11/21/the-oaxaca-uprising

Roundup of Solidarity Actions in the US

Boston and the World Unites to Support Oaxaca
http://boston.indymedia.org/feature/display/190138/index.php 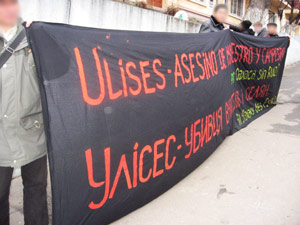