There will be film screenings, a presentation from a native Oaxaqueño and tabling by local organizations.

Wednesday, December 13th at 7pm
Vets Hall in Santa Cruz, 846 Front Street
Suggested Donation $5-20
No one turned away for lack of funds
Download a flyer 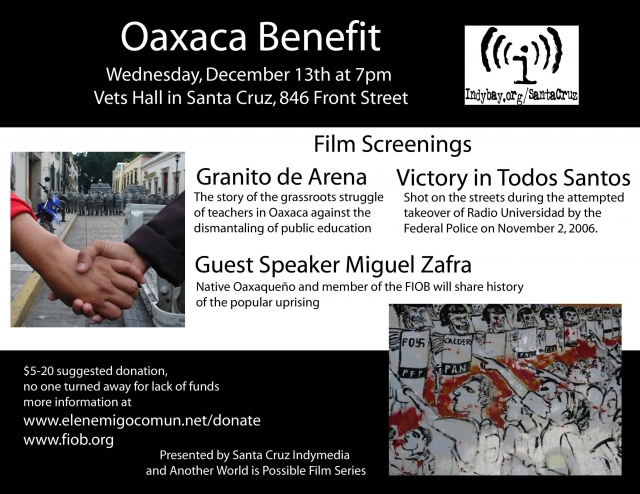 Granito de Arena: For over 20 years, global economic forces have been dismantling public education in Mexico, but always in the constant shadow of popular resistance… Granito de Arena is the story of that resistance – the story of hundreds of thousands of public school teachers whose grassroots, non-violent movement took Mexico by surprise, and who have endured brutal repression in their 25-year struggle for social and economic justice in Mexico’s public schools.

Victory in Todos Santos: a powerful 10 minute documentary by the Mal de Ojo collective on the events in Oaxaca City on November 2nd, 2006. Since March of this year, the center of Oaxaca City has been occupied by protestors who are demanding the removal of the governor, Ulises Ruiz. Victory in Todos Santos was shot on the streets during the attempted illegal takeover of Radio Universidad by the Federal Police, and provides insight into who is involved in the Oaxacan movement and why it is occurring.

Bilingual presentation from Miguel Zafra, a native Oaxaqueño and member of the Frente Indigena de Organizaciones Binacionales (FIOB), Miguel Zafra will discuss history of the uprising in Oaxaca, not just recent events but the years of struggle that have brought the people of Oaxaca to where they are now.

Proceeds go to sending media resources and medical supplies to some of Oaxaca’s most remote indigenous communities, in order to contribute to their ability to document their own histories of collective organizing and resistance.