We call on the Head of Government Marcelo Ebrard to stop criminalizing youth who aspire to and struggle for a more just world; they are singled out just because of the way they think, dress and protest. We stand against this bad capital city government which holds hostages such as Víctor Herrera Govea, showing that it is not much different than the PRI or PAN governments when it jails youth who live in this city of “hope”; evicts poor vendors; grabs the lands of the last peasants remaining in the Federal District and of the residents of neighborhoods and towns where the government is carrying out its tourist projects, highways, and metro lines; and looks down on and represses sex workers.

We proclaim that in this “City of Hope” those at the bottom are not able to aspire to live, to work with dignity, to protect the earth, to commemorate struggles and to travel freely without being exploited, looked down on, repressed, evicted and – like Víctor – unjustly imprisoned.

In view of the above, we demand that the Attorney General of the Federal District order the Public Prosecutor to conclude that there are no charges against Víctor Herrera Govea, as the police who accused him gave false, contradictory and unsustainable statements; there is no evidence of the crimes of which they accuse him, seeing as that he didn’t commit any.

The family members, friends and comrades of Víctor have always maintained his complete innocence. At this moment, Víctor is the only political prisoner from the Other Campaign in the Federal District. Víctor is innocent, just like the indigenous Cucapá comrades from Baja California, the comrades from Campeche who are resisting the high electricity fees and the comrades from Atenco, all of whom were prisoners from the Other Campaign recently freed after proving their complete innocence.

We demand a public audience with the Head of the Government and the authorities responsible for procuring (in)justice to oblige them to recognize that, just as there was no legitimate case against our comrades from Atenco, to be young, to protest and to commemorate October 2 is not a crime.

Committee for the Freedom of Víctor Herrera Govea

———————————————
A group of seven comrades from the Committee for the Freedom of Víctor Herrera Govea and supporting organizations entered and were received by employees of the Attorney General’s Office, among them the Assistant Trial Prosecutor Dr. Martha Laura Almaraz Domínguez and the Principal Coordinator of Counselors Manuel Granados Covarrubias with whom we raised the issue of the more than nine-month unjust imprisonment that our comrade Víctor has suffered. We noted that he is a political prisoner , locked up due to orders sent down from on high, as his detention was carried out in minutes and the order that he be held in prison was given within a few hours without any kind of evidence of the crimes of which he is accused (robbery and property damage). We demanded that the Attorney General order the Public Prosecutor to drop the charges, as they don’t have any kind of evidence to keep Víctor kidnapped, and finally, the Committee delivered a letter addressed to the Attorney General which we attach below. They responded that they are government employees with roots in social and democratic processes, and further that they respect social movements. They denied acting on orders from higher-ups and finished by saying that we shouldn’t doubt that if they find that the charges contain irregularities, by August 5 or sooner, they will acknowledge Víctor’s innocence. We will remain vigilant to the end, as to be young, to protest and the commemorate October 2 is not a crime. 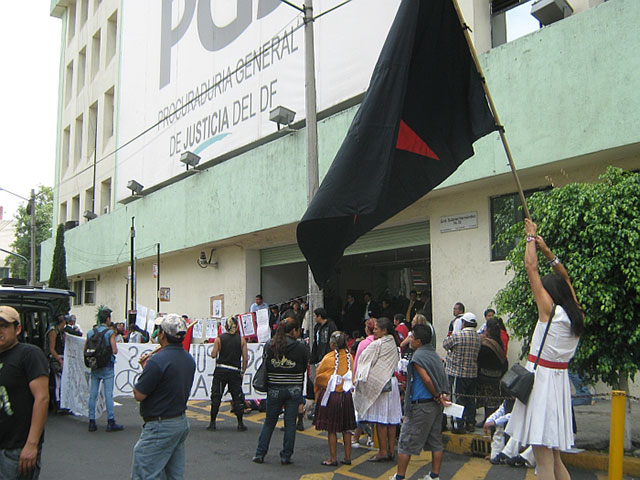