With a sad and heavy heart, I am reporting the death of a friend and indymedia activist Brad Will. He was killed Friday afternoon in Oaxaca City as the town finds itself under a violent attack from the government.

I met Brad in Argentina a few years ago. Now Argentina´s call from that time “¡QUE SE VAYAN TODOS!” (All of them must go!) rings all the more clear. Inspired by what he was reading about Oaxaca, he felt the responsibility to go and record what was occuring in Oaxaca, like so many other people have.

He was shot Friday at a barricade as it came under attack from civilian dressed cops. He was shot in the side and the stomach and died enroute to the hospital. What follows is an account of the day.

Please take actions and let the assasins of Mexico know that we are watching from the other side.

If you use email, please send copies to:
President Elect Felipe Calderón Hinojosa: felipe (at) felipe.org.mx and
Secretary of Government: Carlos Abascal: segob (at) rtn.net.mx

Reports received from Radio Universidad tells that civil population is under attack in the streets of the city of Oaxaca. Also this radio station informs that Indymedia reporter Bradley Will was shot dead. 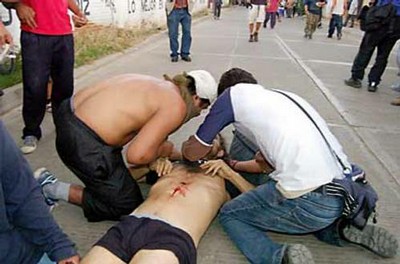 The firsts attacks were reported early this morning, around 10 am when unknown individuals attacked Radio Universidad with heavy gunfire. This radio is under control of students and members of the People´s Popular Assembly of Oaxaca, APPO.

After this morning attack on the radio, APPO declared full alert. Also Flavio Sosa, a very well known activist of this movement announced that a young man was kidnapped in one of the many barricades in the city, in a place known as Puente Cinco. Other clashes were reported in other spots like Colonia Volcanes, where a group of people tried to dismantle another barricade.

Then, around 2 p.m. a group in a pick-up attacked another barricade, injuring a boy in the foot, who later on was moved to a hospital. At Avenida del Ferrocarril, another pickup truck attacked the members of the APPO. Early reports talked about three people injured by gunshot in this action.

At 6:03 pm, Radio Universidad confirms the death of Bradley Will, New York Indymedia reporter , shot in the stomach. This ocured in the colonia Santa Lucia del Camino Also another reporter from Milenio Diario, Oswaldo Ramirez was injured by gunfire. Will was reportedly shot from a distance of 30 to 40 meters in the stomach. His body was put in a volkswagen and died while in transit to the Red Cross.

6:05 pm. Reports indicate that snipers are shooting indiscriminately against civillians from the roof top of the Municipal Palace of Santa Lucía del Camino. Then police attacked the barricade in the Procuraduría de Oaxaca,leaving seven people lying on the ground, their health condition is unknown.

More and more reports keep coming in through Radio Universidad. The state in the city is completely chaotic as the civil population keeps receiving attacks from unknown shooters and police. The activists keep calling to resist. Radio Universidad is the only radio station left from many that the people used to have in their control. If this station falls, the movement will found itself unarticulated and cut off from the outside. APPO calls for a national movement of suport.

Another person is reported dead in another clash between APPO members and other people from Santa María Coyotepec. The circumstances are not yet clear. New reports of shootouts and more attacks continue.

Since the beggining of the conflict, Ulises Ruiz has been using a paramilitary group known by the people as “The caravan of death”. These attackers use AR-15 and AK-47 rifles, shotguns and 9mm guns against unarmed civillians. Before today, the movement had lost 15 members under fire from this killers or by police. Many leaders and activists have been thrown in jail. They also have been kidnapping sympathizers of the movement.

Report back from Brad 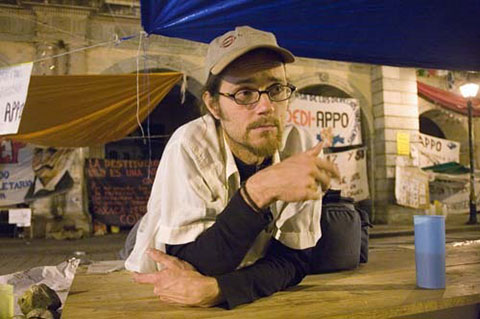 what can you say about this movement — this revolutionary moment — you know it is building, growing, shaping — you can feel it — trying desperately for a direct democracy — in november appo will have a state wide conference for the formation of a state wide assemblea estatal del pueblo de oaxaca (aepo) — now there are 11 of 33 states in mexico that have declared formation of assemblea populares like appo — and on la otra lado in the usa a few — the marines have returned to sea even though the federal police who ravaged atenco remain close by — the new encampment in mexico has begun a hunger strike — the senate can expell URO — whats next nobodies sure — it is a point of light pressed through glass — ready to burn or show the way — it is clear that this is more than a strike, more than expulsion of a governor, more than a blockade, more than a coalition of fragments — it is a genuine peoples revolt — and after decades of pri rule by bribe, fraud, and bullet the people are tired — they call him the tyrant — they talk of destroying this authoritarianism — you cannot mistake the whisper of the lancandon jungle in the streets — in every street corner deciding together to hold — you see it their faces — indigenous, women, children — so brave — watchful at night — proud and resolute

and now alejandro waits in the zocalo — like the others at their plantones — hes waiting for an impasse, a change, an exit, a way forward, a way out, a solution — waiting for the earth to shift and open — waiting for november when he can sit with his loved ones on the day of the dead and share food and drink and a song — waiting for the plaza to turn itself over to him and burst — he will only wait until morning but tonight he is waiting for the governor and his lot to never come back — one more death — one more martyr in a dirty war — one more time to cry and hurt — one more time to know power and its ugly head — one more bullet cracks the night — one more night at the barricades — some keep the fires — others curl up and sleep — but all of them are with him as he rests one last night at his watch