August 18th, 2007 – un miembro del comite de bienvenida writes: Everything went well today in NYC. At its peak, 100+ people. No arrests and a lot of noise. The delegates were spotted at a restaurant half a block away from the consulate. Ruiz was not spotted. He may have been in the restaurant, but it remains dubious. There was another mustached latino man about his size, but not him. Regardless of whether he was there, his presence was certainly canceled in anticipation of the protest reception. The entire delegation’s dinner was interrupted, and then taunted for 3 hours until finally the police created a Hollywood style, roped off exit protest cage, brought in more police and had delegates exit the building in front of the crowd. Ridiculous.

Two SUVs, and 3 taxis drove consul officials and delegates to safety. The action began at 3:30PM, the official consulate press conference was set for between 5:00 and 5:30PM, and the delegates were unable to exit the restaurant until 6:30 PM, and then only with police assistance. There was press waiting at the consulate, but there never was a press conference there. Oddly enough, the protest had little to none, mass media presence. Several Mexican intelligence and consular security personal were documented video taping, taking pictures, and posing as protesters.

There were several confrontations with restaurant security and restaurant property (outdoor chairs and tables), as well as scuffles with the police. There were no arrests, and no serious injuries, other than to the face of the CONAGO delegation of Mexican Governors for even thinking about bringing governor Ulises Ruiz Ortiz to New York to talk about his immigrants here.

The whole thing is so absurd that it almost seems like a provocation. I was up close. I did not see Ruiz. It seems they already sent that fool home. It is clear that a very public strategy of shaming any and all Mexican officials on international tours, with the idea that there are crimes against humanity that must be punished, was very powerful today.

The ignorant twist of a delegation of Mexican governors posing as the champions of the immigrant community, has been exposed. These officials are only here to discuss the thin line between international trade, and international “terrorism”. This meeting is a precursor to an escalation of the criminalization of dissent and immigration and most importantly, the further exploitation of natural and human resources from Mexico. 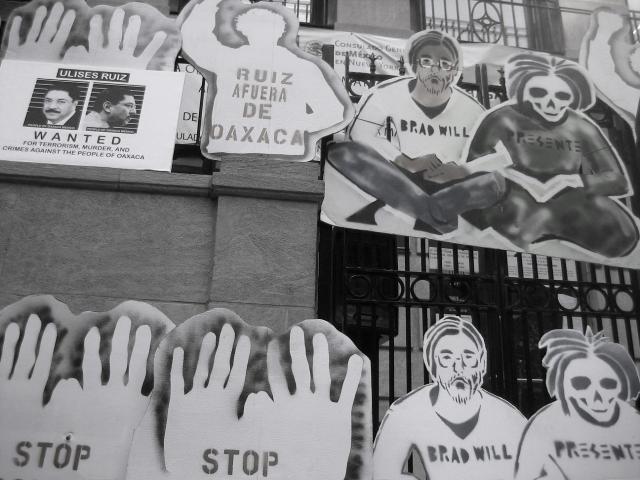 In front of the Mexican Consulate (Brad Will Presente) 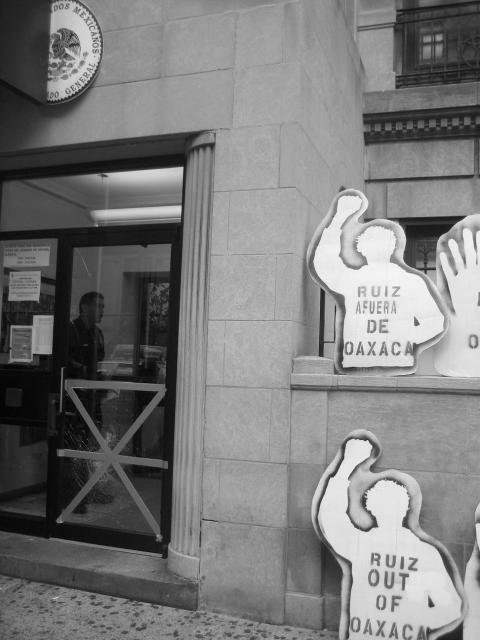 In front of the Mexican Consulate (with a Broken Window) 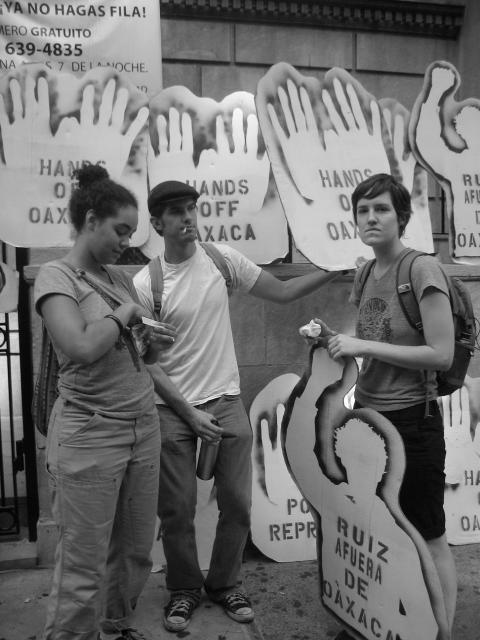 In front of the Mexican Consulate (Ruiz Out of Oaxaca) 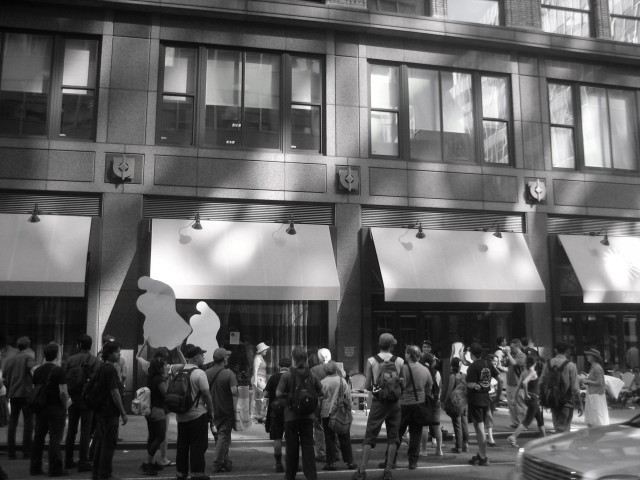 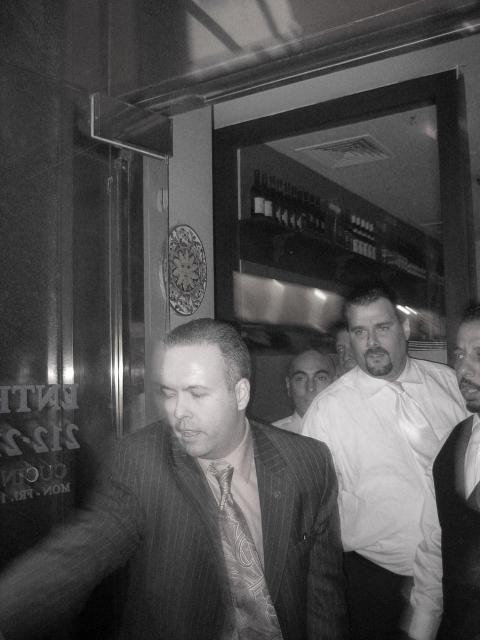 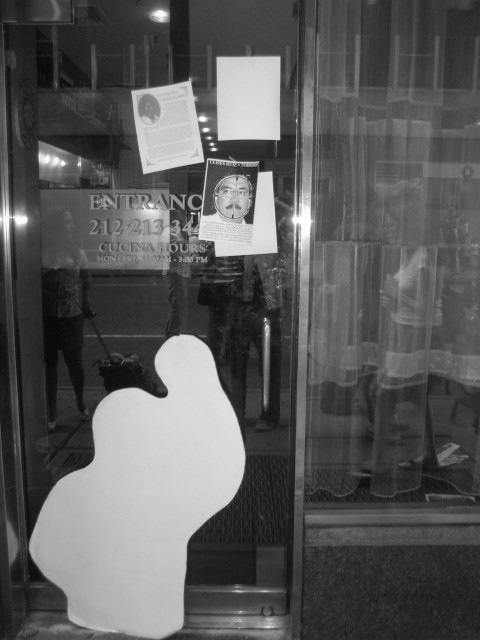 Ulises Is Locked In 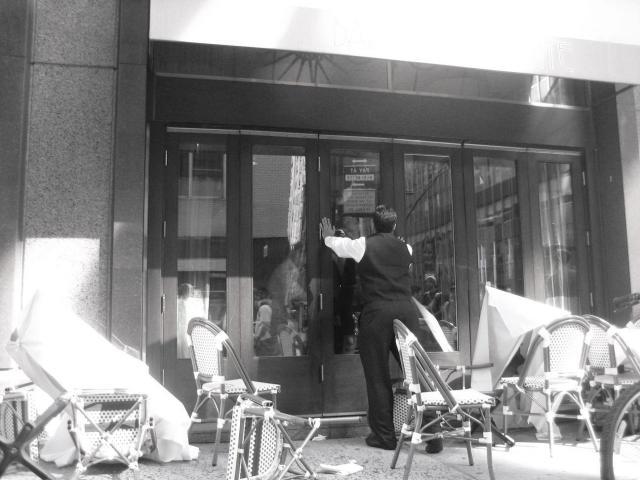 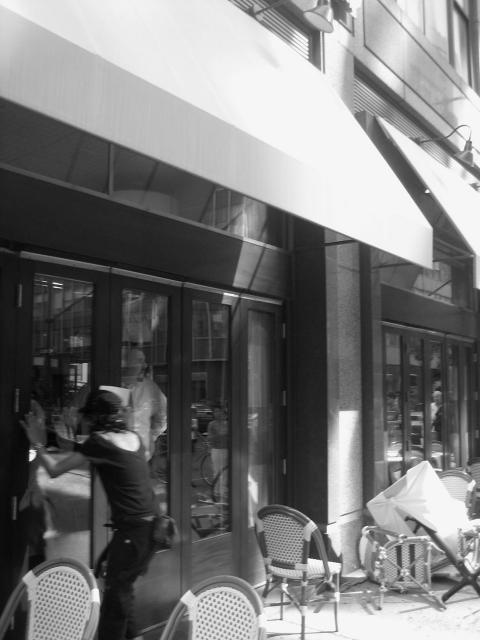 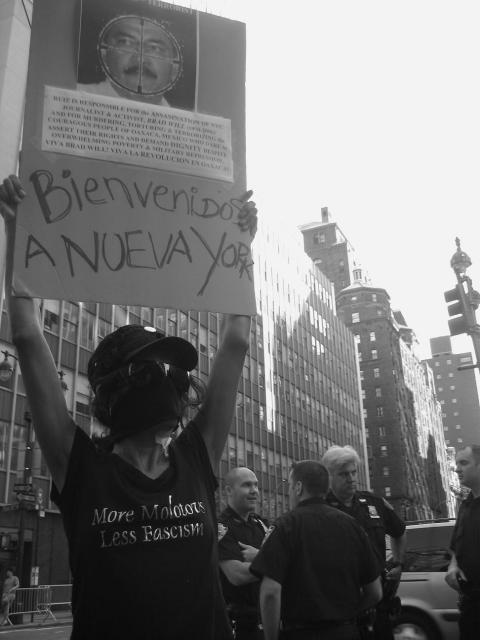 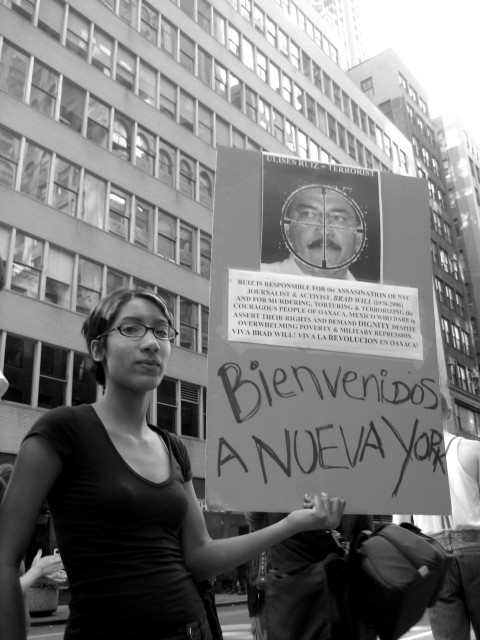 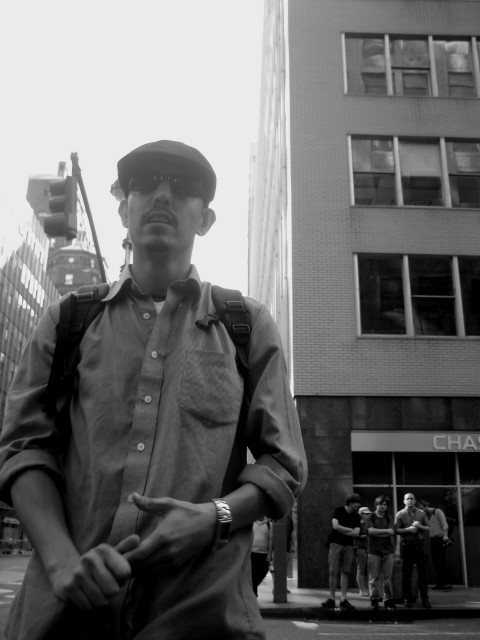 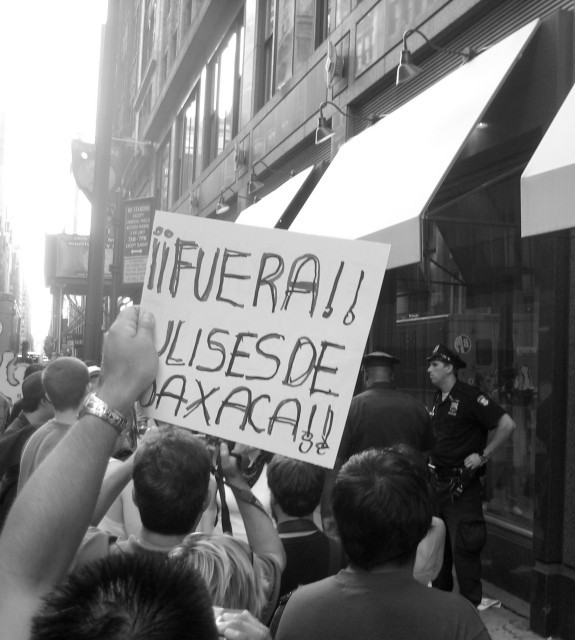 Ulises Out of Oaxaca 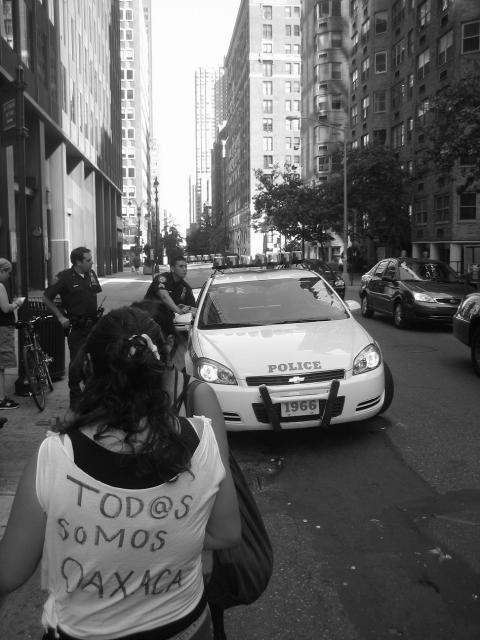 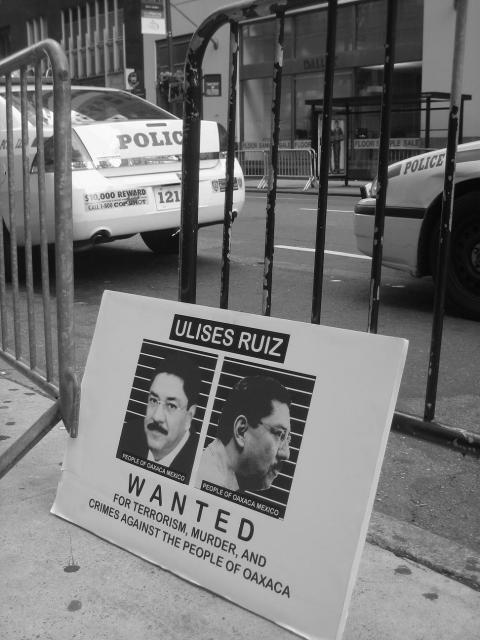 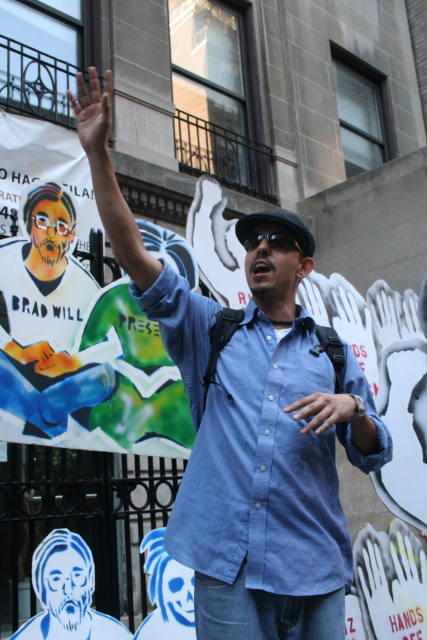 Outside of the Mexican Consulate protesters 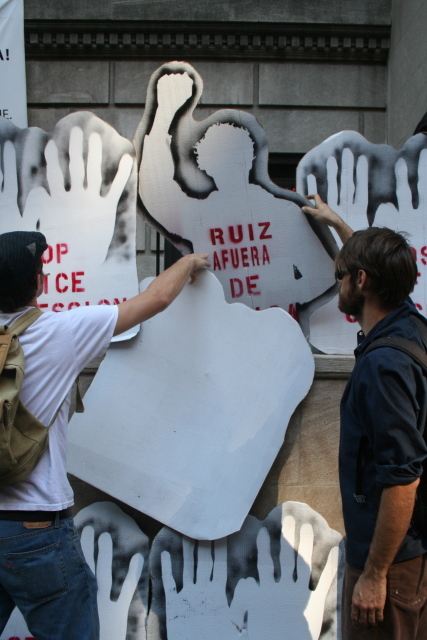 Protesters covering the front of the Consulate with placards 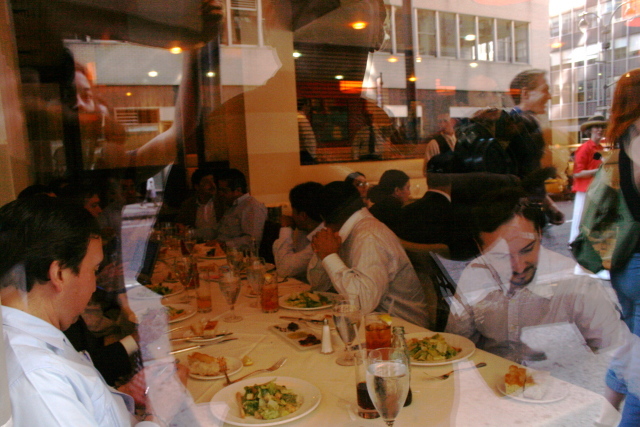 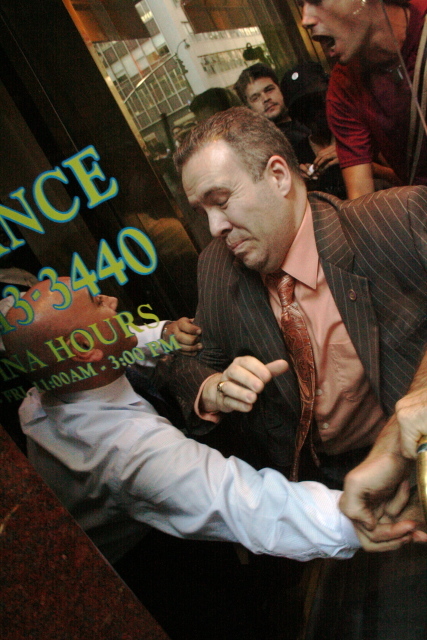 Restaurant employees trying to get the service door closed. 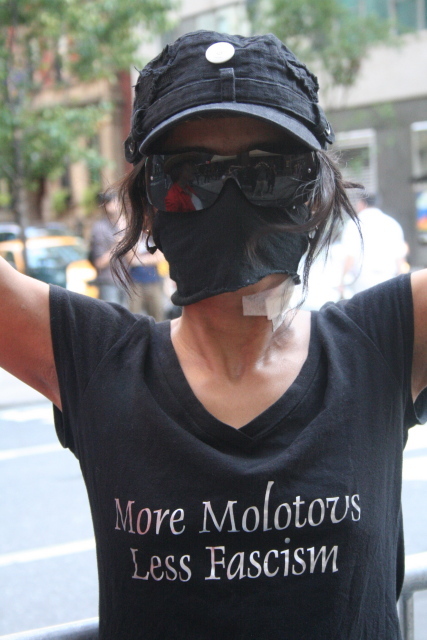 Protester outside of Salute. 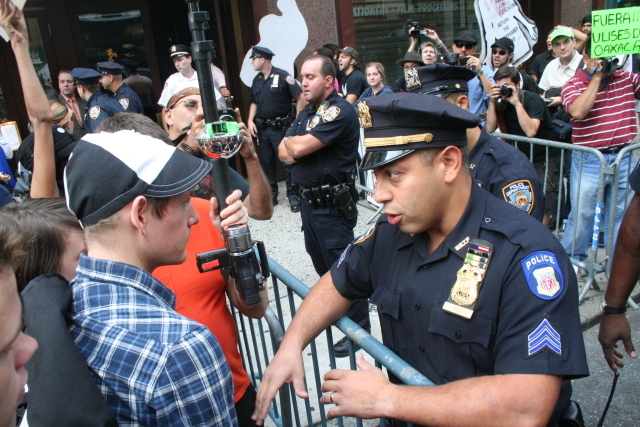 Police hassling protester about a bottle of water. 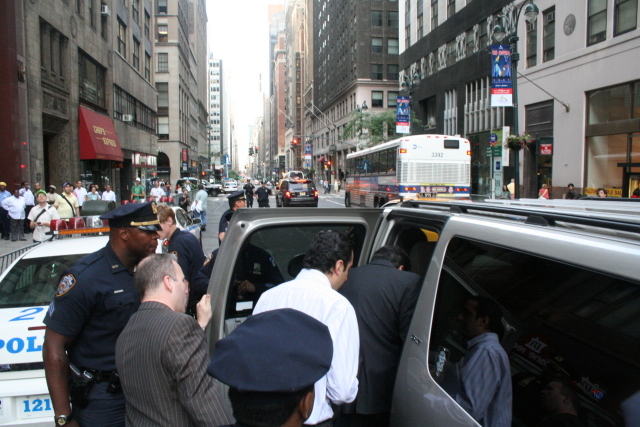 Governors entering one of two SUVs 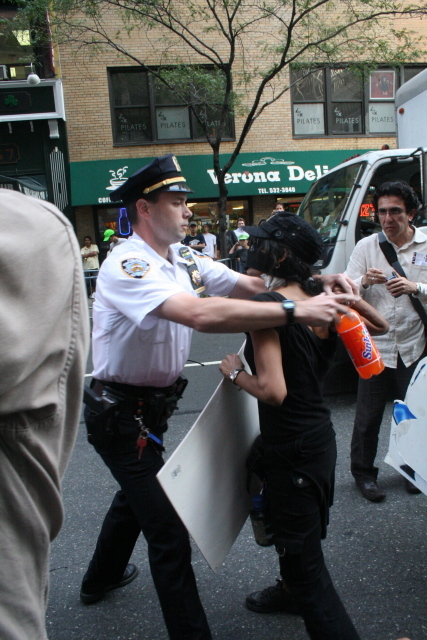 On Saturday August 18, about 50 people gathered outside of the Mexican Consulate to protest Ulises Ruiz, the governor of Oaxaca. Ulises Ruiz is responsible for, among other things, murder, torture, and disappearances in Oaxaca. Ruiz, along with a number of other governors, was in New York to discuss immigration reform. On Sunday they will be in Texas. The event, sponsored by the Ulises Ruiz Welcoming Committee, was set up with less than 24 hours notice. At 3:30 protesters started gathering outside of the Mexican Consulate at 27 E. 39th Street and it soon became known that a number of the governors, possibly including Ruiz, were at a nearby restaurant. While in front of the Consulate at least two things, possibly tomatoes, were thrown. The protesters surrounded the restaurant chanting and waving placards. A few protesters were able to enter the restaurant and quickly got thrown out, but someone managed to flip over all the tables and chairs that belonged to the restaurant that were on the sidewalk. Restaurant employees started pushing protesters when they tried to get the service door closed and at one point someone, possibly the manager, charged at the protesters. The protesters were able to keep the governors in the restaurant until about six and forced them to cancel a five o’clock press conference. Around six the various governors and a few other people left the restaurant under a heavy police guard and got into two SUVs, one of which had diplomat license plates. The police commandeered two additional taxis for the remaining members of their party. It was never confirmed whether or not Ruiz was actually in the restaurant. 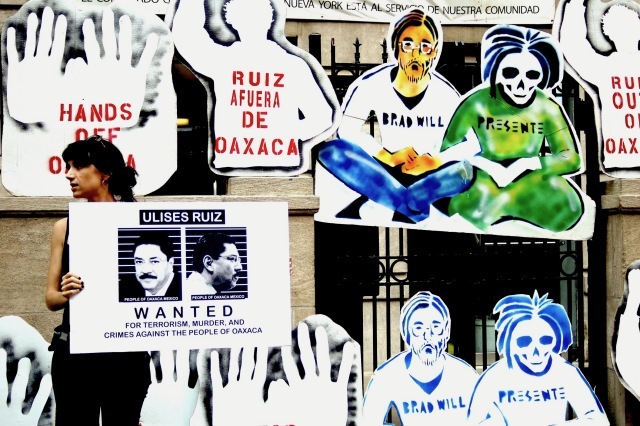 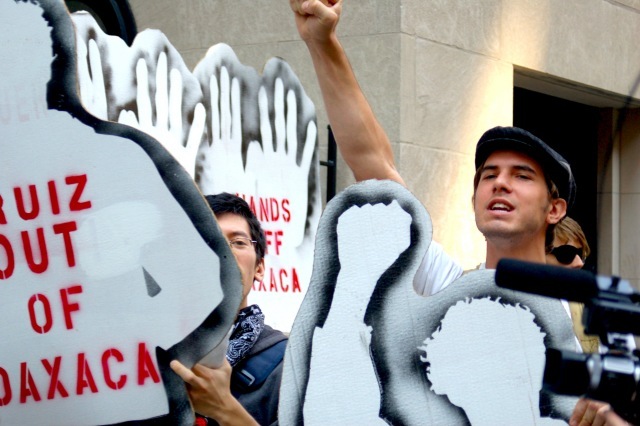 Ruiz out of Oaxaca 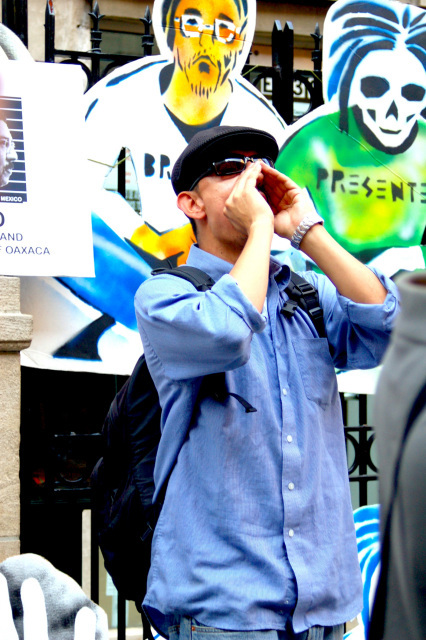 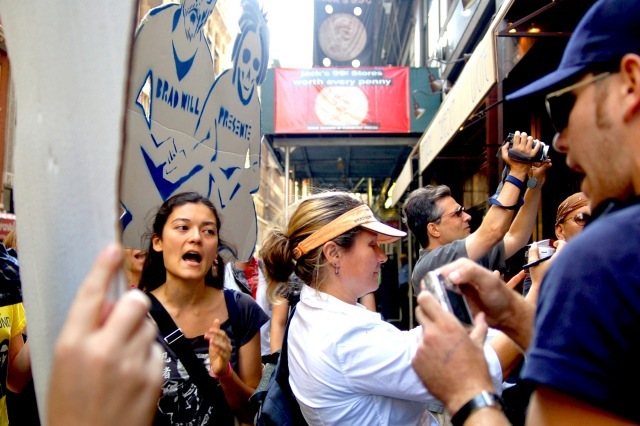 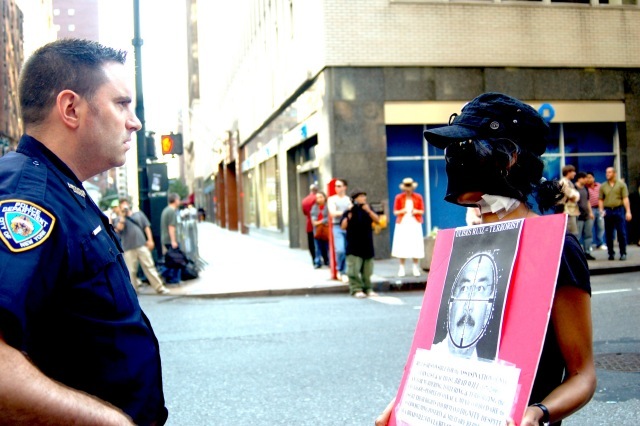 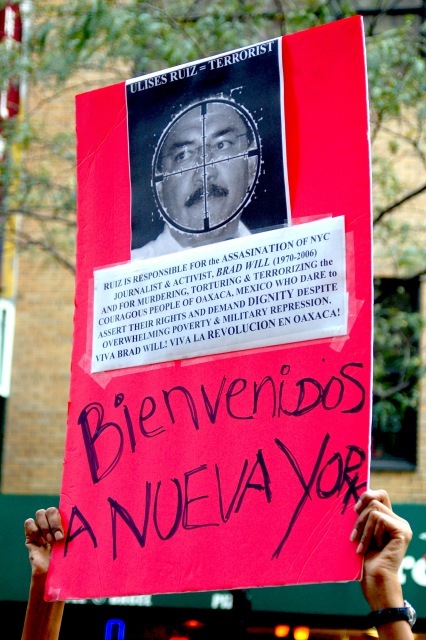 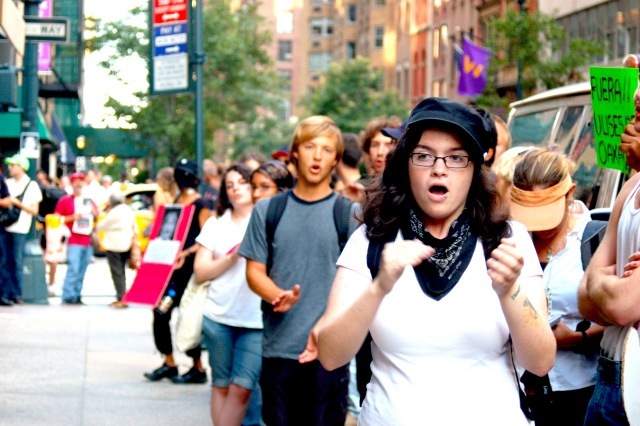 Ulises Ruiz, Governor of Oaxaca and target of a popular uprising in his home state, came to New York for a staged immigration symposium Saturday with a group of Mexican Governors. For his corrupt management of Oaxaca, support of paramilitaries to brutally repress his people, and the killing of NYC indymedia journalist Bradley Will, a proper welcoming committee was formed to confront him at Salute Restaurant before a planned press conference at the Mexican Consulate. Dozens of protestors held a press conference of their own out in front of the Consulate building then surrounded the restaurant. The protestors delayed the Governors long past the time of the press conference, until they had to be escorted out of the restaurant under heavy police protection and quickly sped away.

Representatives of Ulises Ruiz in NYC on August 18, 2007

Representatives of Ulises Ruiz, governor of the Mexican state of Oaxaca, ran a gauntlet of protesters on Saturday at a dinner of Mexican consulate officials in New York City. They were in the Big Apple to discuss “immigration issues” on a tour of Mexican consulates in the United States. The Mexican government officials gathered at a restaurant near the consulate and were met by 50 demonstrators called “The Ulises Ruiz Welcoming Committee.” Protesters banged on the glass window of the restaurant, tussled with the manager and were finally forced back from the building by police, who escorted several of the dignitaries to a vehicle sporting diplomatic license plates.

Read more about the struggles in Oaxaca and the life of murdered video journalist Brad Will
http://www.friendsofbradwill.org

the video clip, filmed form the pen, missed the other side of the SUV where a bunch of people opened the doors and tried tom drag the officials out. You can see some of the cops run over.

myself and a translator entered the embassy as “journalists” for the press conference on august 18th. before the two of us were kicked out (because we didnt have proper identification/presspasses) we can confirm that ulises was neither anticipated, present, nor participating in the “press conference”. His name was not among the name-plaques arranged on the table.