Three Years After The Murder Of Felicitas and Teresa, Young Triqui Radio Broadcasters For “The Voice That Breaks The Silence” In The Autonomous Municiapality Of San Juan Copala

This April 7, 2011 marks three years since PRI-UBISORT paramilitaries murdered Felicitas and Teresa, two young Triqui women who worked with the community radio “The Voice that Breaks the Silence” in the autonomous municipality of San Juan Copala. The crimes against Teresa and Felicitas continue to go unpunished, as do the murders of 20 Triqui men, women and children in Copala since the autonomous municipality was founded in January of 2007. This is the case even now when paramilitary violence has expelled the entire population from the community. Absolute impunity for these killings has been the response of the government of Gabino Cué, who doesn’t dare punish even one of the intellectual or material authors of all the crimes committed during the tyranny of Ulises Ruiz Ortiz. And so, once more it should be the Oaxacan society that strips the mantle of impunity from Ulises Ruiz and all his accomplices in the violence committed against the peoples of Oaxaca during his six-year term of office and even in the first months of this new administration. Neither should we forget that this coming April 27, one year will have gone by since the paramilitary attack on the humanitarian caravan headed for San Juan Copala. In this attack, Bety Cariño and Jyri Jaakola were killed by PRI paramilitaries, who continue to enjoy total impunity.

This prevailing impunity is a serious matter for the Oaxacan society because it creates the climate of a dirty war in which social activists and organizations are not sure where these attacks are coming from. Yet they still go on day after day, as is the case with the recent disappearance of the teacher and member of Section 22 of the democratic teachers’ union, Carlos Rene Roman Salazar, last March 14. While the Gabino Cué government denies its participation in new attacks against the social movement and many organizations haven’t been able to identify the authors, violence against the peoples of Oaxaca continues on a daily basis.

And so we invite you to the political-cultural activities commemorating and denouncing the murders of Felicitas and Teresa on April 7, 2011, at 5 o’clock in the afternoon, in the Oaxaca city Zócalo at the encampment of the people displaced from the autonomous municipality of San Juan Copala. In the face of the arrogance of impunity, the peoples of Oaxaca must respond with mobilization and social struggle. 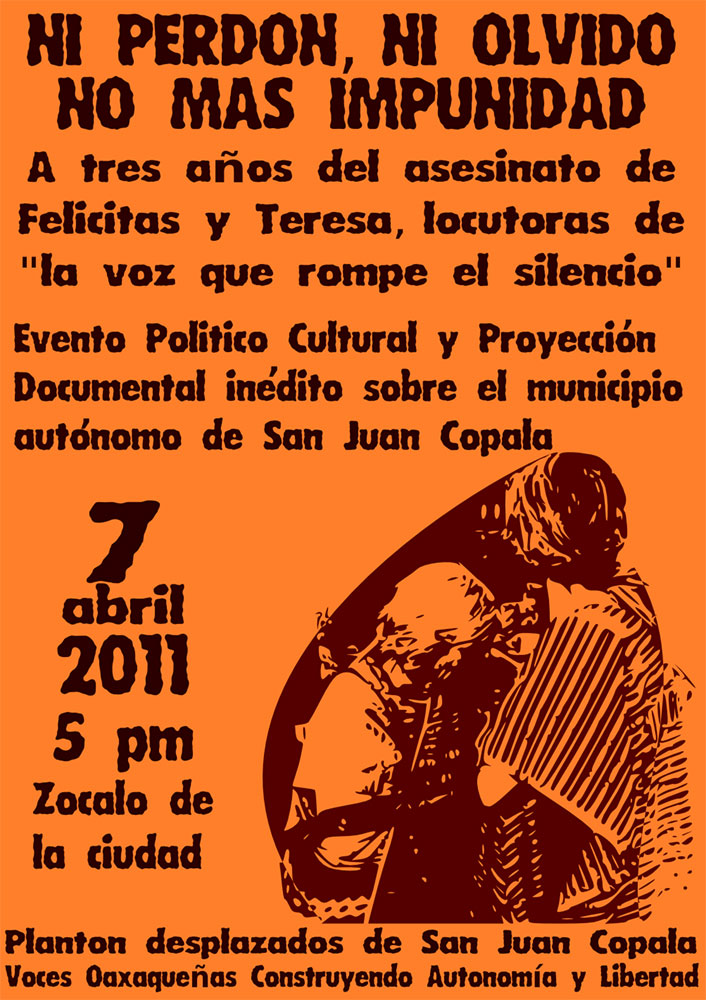