Only a little more than a month after the brutality of Atenco, the Mexican government has once again revealed its tendency to violently repress political activity. This is what Governor Ulises Ruiz Ortíz means by “doing away with the social problems” of Oaxaca.

For the past three weeks, teachers, families of students, and the young students themselves have been in plantón, peacefully occupying nearly 50 blocks of central Oaxaca City. Essentially, the teachers are demanding a living wage from the state government and Governor Ulises Ruiz Ortiz. However, tensions have risen and the demands have transformed into a broader demands against neoliberalism and the ousting of Ulises Ruiz Ortiz.

The teachers, families, and students had constructed a vast tarp and tent city sprawling across the city center and into the outlaying streets. When walking through the zócalo, one must constantly duck and dodge the web of ropes holding the tarps aloft. Thousands of teachers, families, and students are constantly meeting, watching the World Cup, and awaiting some sort of resolution with the government. The presence of the teachers in the zócalo has changed the vibe of the city from a tranquil, beautiful tourist town into the brewing political storm that lies underneath the surface of beautiful beaches and tourist trinkets.

This morning between 4 and 5 while the protestors slept, the 3500 Ministry police and federal police viciously attacked the plantón. The line of vision in the center of the city seems suddenly open. During the plantón you could not see a block ahead of you because of tarps crisscrossing every street. Now, you can see for blocks and thousands of multicolored tarps lay crumpled on the ground. Trash is everywhere, smashed dozens of eggs are starting to smell in the heat, smashed TVs and glass litters the ground, and nearly every store in the vicinity is closed for fear of violence. My eyes burned and leaked because of the smoldering remains of plastic tarps, set ablaze by firebombs thrown by the police, mixing with lingering tear gas dropped from helicopters.

The Red Cross reports that 7 adults and 3 children were killed in the attack or due to inflicted wounds. Indymedia Oaxaca reports that 100 people have disappeared.

And Oaxaca remains in a state of war. The people are pissed. Crowds with sticks, pipes, and machetes roam the streets anticipating another attack from the government. Roving protests have shut down the city. Ruiz Ortiz may be hiding in his home, but right now it is a temporary state of chaos in the city center. Who knows what will happen. 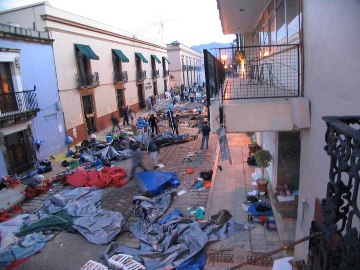 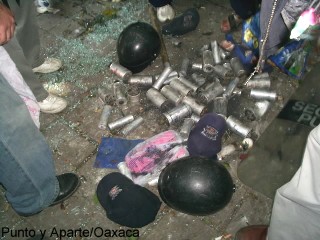 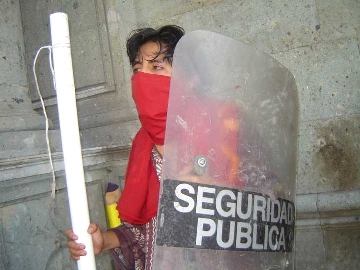