APPO and PFP battle in Oaxaca After March

After peacefully protesting the presence of federal police forces in Oaxaca City on November 25th, 2006, the people of Oaxaca were blitzed by police agents and paramilitaries. The low-intensity warfare experienced by the Oaxacan people intensified to a new level as police and paramilitaries coordinated together to open gunfire at protesters. Hundreds of people have been arrested, disappeared, wounded and are hiding in houses for fear of their lives. Terror permeates the city as the popular movement of Oaxaca regroups for another day of struggle and the exit of Ulises Ruiz.

There are reported to be 4 different armed groups operating in Oaxaca City at the moment, PRI backed paramilitaries, the Federal Preventative Police (PFP), the state police and the Federal Investigative Police (AFI). PRI radio stations have been provoking attacks by broadcasting the streets and neighborhoods where demonstrators were hiding. They have also been encouraging attacks on foreigners in solidarity with APPO. Read More 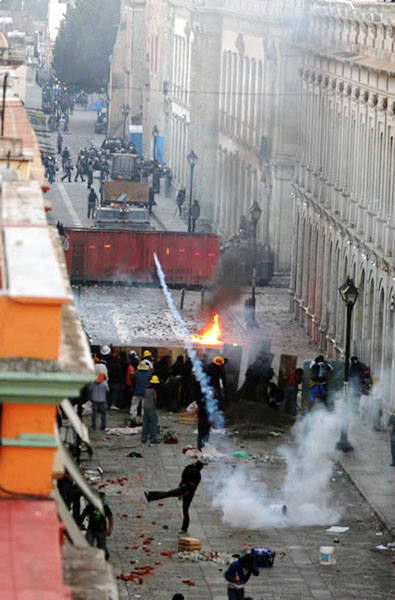 November 25th, 2006 – A peaceful protest in Oaxaca was repressed by the federal police stationed in the center of the city. By nightfall, a few people were reported killed, hundreds arrested and hurt and many disappeared.

Today, after the seventh megamarch in Oaxaca, members of the APPO attempted to form a human fence around the federal preventative police (PFP), but were attacked with gas. This unleashed a series of clashes with violence again igniting in the city. Many have been arrested and there are reports of many wounded, some by gunfire. It is confirmed that three people were killed.

The march unfolded in a festive atmosphere until it reached Oaxaca’s downtown. There began the attempt to form a human fence around the PFP forces in Oaxaca’s zocalo. Groups of PRI members started provoking the demonstrators with insults and shooting slingshots with marbles. Later, the PFP began using tear gas to disperse the people. People started to withdraw, but police kept moving forward and then began the riot. While shooting off tear gas, police kept charging on. People tried to resist in a peaceful way, but couldn’t stand up against the tear gas. The people began to defend themselves with rockets, home made bombs and stones.

The situation became very tense toward the area north of downtown where the police attempted to surround the protesters. At some point, the PFP entered Santo Domingo, which is occupied by an APPO encampment, and then set fire to the camp. Many fires started throughout the city, which were set by saboteurs. A bus near the University City, a door of the Hotel Camino Real and then the legislative palace and external relationships buildings were all set aflame.

The police started using gunfire and also shot gas cans at the protestors. This practice has killed people before in Oaxaca on Nov. 2 and in other places like Atenco. Radio Universidad made a general call to withdraw and to get off the streets. Three people were shot by police from two pickup trucks using heavy gunfire near the College of Medicine. Reports indicate more than one hundred shots heard. The killers took two of the bodies and left the third one lying at the spot.

Near a place known as El Pochote, a big group of people were surrounded by the police. Also in the streets of Fiallo y Colón, a big number of teachers and workers of the health department were detained and removed in two buses. To the north of downtown, several reports indicate that there were massive arrests of up to thirty people who were sprayed with gas after being detained. In a place called El Fortin, witnesses report how police were beating up and torturing detained ones before moving them from the spot aboard pickup trucks. Radio Universidad keeps transmitting and making announcements and denunciations.

The pacific mobilization received an attack from the federal police with gases and gunfire. Then protesters faced a wave of repression by armed police officers and paramilitary which resulted in the deaths of three people, many injured individuals, more than 60 detained protesters and innocent bystanders and an unknown number of disappeared people. The numbers are increasing because violence has not ceased in the streets of Oaxaca.

People caught on the streets are looking for safe places to hide as the night promises more terror. Radio Universidad is asking its listeners to open their doors and allow people to hide. Now the PFP is entering people’s homes to ransack them and search for protesters. The APPO has made a plea for all national and international organizations in solidarity with the Oaxaca struggle to protest where they can against the brutality of the Mexican federal government in its support of Ulises Ruiz.