The three left a meeting of the State Council of the Peoples of Oaxaca that was being carried on at the building of Section XXII of the National Union of Education Workers which is located on Armenta and López, a street of the former Government Palace [an ornate building], an area surrounded by state and federal police. Florentino López is the current spokesman of the APPO, Otalo Macario is the representative of the Ocotlán sector of Section XXII of the SNTE, and Pedro García is a student leader in the UABJO [the Benito Juárez Autonomous University of Oaxaca].

The van in which they were traveling was followed by paramilitary groups that caught up with them in Guerrero Street near Cinco Señores Square. Two vans blocked them there and individuals in civilian clothes with heavy-duty firearms pointed guns at them while they got down from the automobile, knocking them to the ground. “Alejandro Barrita was handling this operation” said Macario Otalo, whose face was bloodied, at a press conference.

“We understand that this is due to the fact that we are continuing the struggle without pause and demanding immediate response to all the demands that were made in the letter of petition, in which the principal point is the exit [from the governorship] of Ulises Ruiz Ortiz.”

“Thanks to the people, with whom as always we have confided, who have thousands of ears and thousands of eyes, that today we are free” said Florentino López, with his torn shirt and his body full of blows.

“The only thing I noticed were various firearms, some small and others large, aiming at us while they surrounded us. I felt the boots on my head, they threatened us and put the three of us up in a van while some of them climbed up in the van that we had been traveling in.

“They talked among themselves that the people would pay, that they could see a motorcycle following. Then one of them gave the order: remove it, get rid of it. We feared for the life of that unknown person who followed us.” The spokesman López Martínez talked in front of the Rectory.

Immediately on being kidnapped with a great deal of violence, the three members of the State Council of the Peoples of Oaxaca were taken to a clandestine dungeon through a long stairway of terraceria where they were separated in different cells and were tortured. “They pressed a gun against me.”

“Don’t you do anything, stupid, Lopez Nelio is your dumb brother.” They questioned Florentino in one of the state government’s efforts to tie the APPO with that political party, given that López Nelio is a local deputy of the PED:

We are the death squadron

“Do you know who we are? God willing when you’re farthest on (close to dying?) you (will) agree with us, we are the death squadron, we who carry an insignia of the interlaced red-colored cross.

After a first session of blows and kicks, they arranged Florentino López’s hair and clothes to take photographs of him. Then they also photographed him undressed. “First they take the photos and then the rest” said a head of the torturers. After the photographs they continued dealing kicks to his stomach, to his head. They pressed a gun to his temple while questioning him. “What were you doing? What are you committed to?” Questions and more kicks. They insistently questioned “What are the agreements?” in the midst of a rain of blows, referring to the agreements taken in that session of the Council that day. Kicks and blows that didn’t allow him to breathe, while threatening to pull the trigger to obtain the information. But Florentino refused to give any information.

The threats were constant, the psychological torture was about the idea of throwing them into the ocean from an airplane.

After the torture in this clandestine cell they put them in a van, amidst threats. On getting them out, behind the Plaza Soriana, they shoved them against the van, putting the pistol to their heads and threatening to fire. There they abandoned them. On seeing that the hired assassins had gone they approached a group of youths who were about 50 meters away.

With one of the cell phones that was returned they managed to communicate with the comrades and to leave the place. The paramilitary group robbed a report and a laptop that contained agreements of the APPO and the Popular Revolutionary Front, organization (I think this refers to the FPR, not sure) to which the three who were kidnapped belong. 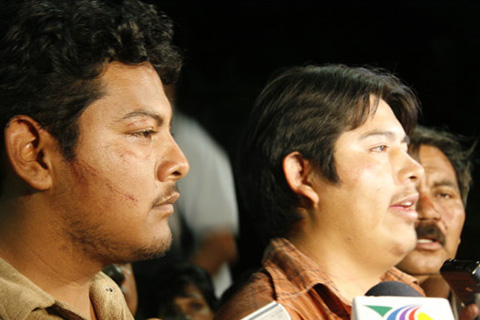 The Oaxaca Rebellion has been defeated.

The problem of the failure of the rebellion was not the lack of popular support. As can be seen from the Media coverege. The problem is that even as it is recognized by the supporters of the rebellion that indigenous people of Mexico , by costume and tradition can build abetter system that the one ruling in Mexico now. The participation of indigenous people in the struggle in Oaxaca was more of name that of fact.
The rebellion was lead by people with a leftist frame of mind. Not with a Maya Cosmo vision.  Historically we know that who ever fallow the left will at the end be defeated. It have been proved on and on from the Paris commune in 1871 to the Nicaraguan Sandinista political revolution. Leftist have not a viable political solution to the problem of oppression.  The most they can do if they take power is to install a  autocratic dictatorship as in Cuba .
The Oaxaca rebellion was lead by university professors formed in the Marxist- Leninist persuasion. This pseudo social science blurs their intellectual understanding. They can not understand the social forces playing in the field of the struggle. And they reject any input that is not framed in the jargons of Marxist thought.
Yes they thought they were struggling on the name of indigenous people. But they do not let the indigenous people conception lead. Becoming a wall between the people and their natural leadership.
The result is that they end trusting the agitators and governments infiltrators that become eco of their political miss conceptions and fight the native dissenters that do not agreed with their languages and political strategies.
The Maya people understand from tradition that a society is composed of four classes as is represented in the social cosmo vision of the four directions. This is the core of our spiritual rituals. Most of you think that our in insistence in saluting the four direction in our rituals come from plain superstitions. No my friend it come from a profound understanding of reality . Look at this. I am going to tell you now some thing that never has been observed by any European philosopher or scientist.
Reality comes from the will of the creators. Matter, which is substance, is formed by the conjunction of Time. Space, Energy and Information. This blue print is the basis of all creation. And is the cardinal and structural basis of all existence. Let look at an Embryo in it original form and you will see under the microscope that it is formed by five cells one in the center contain the will of the creators and has in essence the four elements that conform existence. It is surrounded by four cells that are the manifestation of its functionality. The first is that represent tine is the genetic material the will develop into the brain and the cognitive system the second cell contain the genetic material that will develop into the nutrition system which main organ is the stomach. The third cell contains the genetic material that will develop into the defensive system and the four cells contain the genetic material that will develop into the reproductive system. The central and fifth cell as containing the other four functionalities will replace any of the four other cells if one of them is removed or destroyed during the embryonic stage of the individual body.
So if you apply this knowledge to your understanding of society you will see that human society is also composed of these four elemental functions that form our class based society.
So there is four social classes in all human societies one is the intellectual classes the other is the Economic class, the third is the political class and the four is the Military class. That conform all the defensive system of the society.
The rebellion in Oaxaca was a rebellion of part of the intellectual class of Oaxaca with some popular support rebelling against a sector of the political class. But in this case this sector of the political class count with the support of most of the economic class and the support of the military class. But the leftist intellectual can no see reality as it is because they see it through the lenses of Marxism that teach society is composed of two classes the working class and the Capitalist class that they call the “Burgesia” in a totally historical misunderstanding they inherited from Marx.
Lead by that misconception they could only win if the other side is in an internal crisis. But even if they win at the end they will be the looser as you can see happened in Russia and China . Where people with this misunderstanding of society have topple the ruling classes. In both places happened because the society was at war and the Army, the political class and the economic class joined the Marxist intellectuals. But as you see at the end both system of power collapse. China adopted capitalism and now is the largest industrial economy. The Russian empire collapsed under the weight of a parasitic political class that had turn it economy unproductive and only was able to stay in power by crud repression.
The fact is that we still are under the European occupation and leftist ideology as well as Christianity is part of the cultural colonization of our people. Christianity and Marxism are the two faces of their ideologicalrule.
The rebellion of the people of Oaxaca was defeated because they were lead by people whose mind have been colonized and destroyed by the pseudo science of Marxism.

I am price of the native people of America .
But my kingdom is now underground. That is it is clandestine, because of the occupation of our lands by the conquistadores that destroyed our temples and took over our cities forcing us to take refuge in the jungles or work as salaried slaves for the occupation.
But the kingdom of the Ixzaes is to emerge when the Empire of greed falls. As it will be overthrown by the Anarchist. The Mayas are now the new people of God and the Ixzaes are its priest and I am its Prophet King as was King David to the Jew.
The Maya kingdom that is to happens is  The Kingdom of God on Earth.
I am the first Ahau of the new calendar count that will start on 2012.
Here I give you a sign as proof of what I am saying:
On 2007 a great financial crisis will start, triggered by the fall of the Real Estate market.
The fall of the housing market will pull dawn with it the whole USA economy and the whole world will be in crisis. And the Empire of greed will collapse.
The descendants of the Europeans the Gold Eaters that now rule on our lands will start to return back to Europe looking for safe haven. Many of them also will head South to Argentina , Brazil and Chile and other place of the world but also there they will feel no safe and will head to their home-land, Europe .