ONE YEAR AFTER THE PFP’s DEFEAT IN OAXACA

November 2, 2007 – Kolectivo Todxs Somos Presxs writes: Fifteen arrests are reported, including teachers, students, and youth. The state police continue to make arrests in the streets surrounding the 5 Señores municipal agency and the area around University City.

A year ago today the Federal Preventive Police (PFP) tried to tear down the 5 Señores and Soriana barricades. This morning, November 2, 2007, a number of people gathered at the 5 Señores intersection to lay out carpets and altars on the Day of the Dead in honor of more than 23 of our own people killed by the state and federal governments during the Oaxacan movement.

At approximately 6:30 a.m. the sand was in place for making the carpets and the 5 Señores crossing partially blocked. By this time the state police were already patrolling the area on motorcycles. At approximately 7:30 the police arrived. There were several state police trucks with police on board and bunker type trucks full of state police. All in all, there were around 100 armed police. They pointed their guns at the people at the intersection, surrounded the area, and began to follow and arrest people who ran.

At this time we know of approximately 15 compañeros and compañeras who have been taken to the offices of the Department of Citizen Protection (CEPROCI) and the Attorney General’s Office in the Experimental neighborhood on the edge of the city.

WE HOLD THE MINISTER OF PUBLIC SAFETY SERGIO SEGRESTES RÌOS (FORMER PRESIDENT OF THE OAXACA STATE HUMAN RIGHTS COMMISSION) RESPONSIBLE FOR THE PHYSICAL AND EMOTIONAL INTEGRITY OF OUR COMPAÑER@S WHO HAVE BEEN ARRESTED.

!WE DEMAND THE IMMEDIATE FREEDOM OF ALL ARRESTED COMPAÑER@S!
!STOP THE REPRESSION! 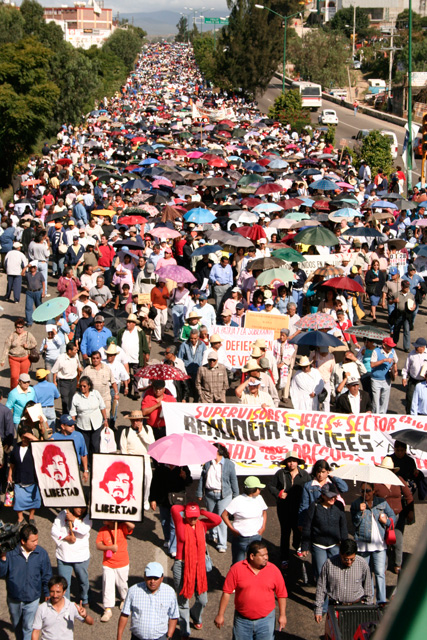