Take the picture alone or in a group, spread it around in social networks online, and make sure to send a copy by email to:
comunicacion (at) centroprodh.org.mx

On the 3rd and 4th of May 2006, during the police operations in Texcoco and Atenco (Mexico), the Mexican State (the 3 levels of government and the three central police agencies) tortured 207 people who they arrested, and sexually tortured the women who were captured that day.

From that day on, the women who were arrested began a legal process against the Mexican State, which has reached international courts.

This Thursday, March 14, 2013, The Inter-American Commission for Human Rights (IACHR) will hold a hearing in which a team of women will give their testimony.

We must stand in solidarity with these women!

Take a picture, with a message of solidarity “Together we stand with the women of Atenco before the CIDH” and other messages in the same vein. Circulate the image around the internet and send a copy to the Human Rights Center Miguel Agustín Pro Juárez: comunicacion (at) centroprodh.org.mx

-Come to the press conference in Mexico City on Thursday the 14th at the office of the Human Rights Center Miguel Agustín Pro Juárez, at Serapio Rendón 57A, Col. San Rafael, México DF, at 9 am.

NOTE:
Make sure to visit and spread the word in all the media outlets you can reach (websites, press, independent media, organize photo exhibits, radio programs, cultural weeks, etc) about the project Mirada Sostenida (Sustained Gaze) by Liliana Zaragoza: www.miradasostenida.net

Seven years have gone by since the 3rd and 4th of May, 2006, when in the streets of Texcoco and San Salvador Atenco, the three levels of government, together with the three main political parties, and the whole apparatus of the Mexican State, unleashed their violence and brutality by means of their police and judicial forces against men and women who defended their right to work and solidarity among those at the bottom. During the police operation, 207 people were violently arrested and tortured physically, psychologically, and sexually during the the time they were taken from the town to the Santiaguito and La Palma prison. Afterwards they were dragged through judicial processes for years, inside and outside of prison.

In those days of 2006, solidarity between those at the bottom and to the left rose up throughout Mexico. From the rebellious dignity of the Mexican southeast, to the painful border in the north, it rose above borders, throughout the entire planet. That solidarity, that pain and rage that is born down below makes us never forget those days, that violence, the torture, the prison. We will not forget the inherent stupidity of the State and its violence, nor the dignity that challenged it, the dignity that rose up from the prisons. We down below and to the left, do not forget those days, that violence, nor those signs of solidarity and dignity.

Following those repressive days, a group of women who had been arrested and tortured by the Mexican State decided to file charges against the government for the sexual torture they were forced to suffer. The charges began in the national courts where, as expected, they were silenced and forgotten. This paved the way to file charges in international bodies such as the Inter-American Commission for Human Rights. In these seven years, these women have pushed forth the international court case with strength and dignity, bringing the Mexican State to court and making evident the nature of the capitalist system as well as the role of the State itself.

This Thursday, March 14th, 2013, the women will appear before the Inter-American Commission for Human Rights, and in response we raise our voices, our solidarity with them and with their dignity. We send them the message that they are not alone in the struggle against the State who imposes oblivion of the violence and torture they inflict. We say to the women: we are with you, from whichever corner of the Earth in which we stand. We raise all of our solidarity with you, to accompany you in this struggle that you took on.

The women declaring to the CIDH have made it clear that their struggle is to achieve reparation for their lives, and that reparation is not limited to legal spaces, but rather is built, that reparation is made from below and to the left, reclaiming their lives, and making it clear that the State violence could not break them, that they, together with their collectives, their organizations, have become stronger on this path, and not due to the application of the law, but rather to the solidarity and dignity that comes from the very bottom.

This is why we call upon collectives, organizations, family members, peoples, and individuals to make a public statement using all the media that is within our reach, in solidarity with the women filing charges in the CIDH in the case of Atenco, so that they know they are not alone, we are at their side, just like we have been all these years, and we will continue to accompany them throughout the trial, we will continue to be present, with all the solidarity and the dignity they bring out in us.

Against displacement and repression: 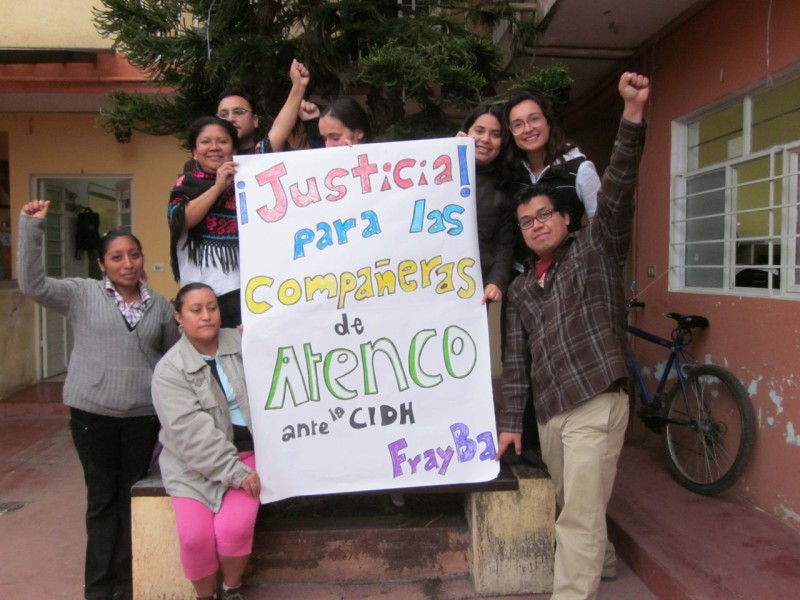