Pedro Preciado is a large man, his 120 kilo body weight and one meter ninety centimeter height leave no doubt to that fact; his speech however is soft and slow, he has the kind of calming voice which transmits peace. Pedro is a Christian pastor with the Free Methodist Church and he gives services in Tepalcatepec, and part of Coalcomán, both municipalities are in the state of Michoacán.

The 10th of January, Pedro along with his wife and two daughters, left Morelia and headed toward Coalcomán. They traveled in a white truck with signs from the Christian Church Pedro belongs to. Upon arriving at the intersection in Cuatro Caminos, approximately 1 kilometer from Nueva Italia, the highway was blockaded by two federal police cars. They made a u-turn and after some maneuvering they were able to find a way out a few meters up the road, when they found another blockade. This time there were some dump trucks and cargo trucks, as well as some federal highway patrols and other municipal police from Nueva Italia, so they decided to wait out the blockade so that they could be on their way.

A little further down the road some trucks began to advance, so Pedro got down from his vehicle to get a little closer and see what was going on. A municipal police officer asked for his ID and asked where he was headed. Pedro identified himself as a pastor and said he was head to Coalcomán.

“Why are you going to Coalcomán?” asked the police officer.

“To give a sermon. As you can see the entire region has turned into a living hell, and we want to see if someone might repent for everything that is going on,” responded the pastor.

Pedro returned to his vehicle and a half hour later the police told the family that the blockade was going to be lifted and they would be able to go on their way.

They continued their trip a little further, and at a spot where a few months earlier members of the Knights Templar cartel had ambushed some lime farmers who were protesting in commemoration of the anniversary of Emiliano Zapata’s death. Pedro and his family were able to see that there was another blockade with two tractor trailers, which were in flames. One more so than the other. Despite the information they had received from the municipal police in Nueva Italia, the family came across another blockade, except that this time the situation was more confusing, there were no longer police involved, but rather several civilians could be seen above and below the pedestrian bridge at that location.

It was 3 pm, and someone came closer to them and told them they could go ahead, that the blockaded had ended. Another individual moved the tractor trailer that was half in flames, opening up the roadway and allowing some cars and trucks through, among them the Christian family.

They were able to get as far as Antunez, but like a fiction horror movie, where the protagonists go through a thousand things before being able to get away, a group of civilians blocks the roadway and tells them to stop. It was four young men between the ages of 17 and 22 with radios and motorcycles. They are members of the Knights Templar cartel. 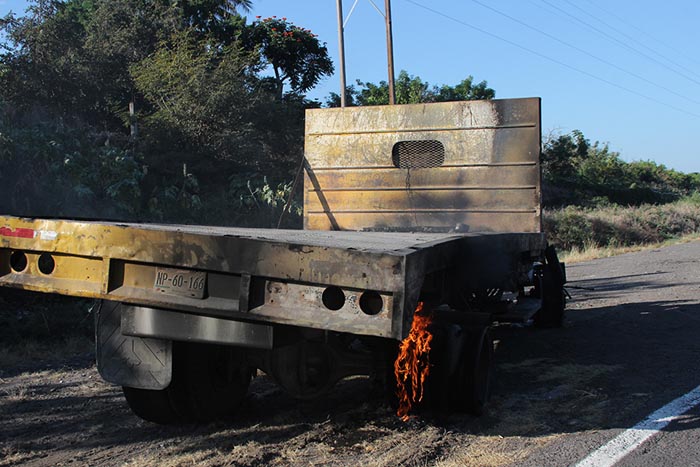 “Give me the keys to your truck, take your things down, if you cooperate with us, we won’t burn your truck. So get down, give us your keys, have your family, your wife and daughters get down and we will take care of them for you.”

The safe house where the family was moved to is visible from the highway. One of the young men tells Pedro to help him move vehicles in order to block the roadway because the white dogs were coming. That is what the Knights Templar call the self-defense groups. The young man gives Pedro keys so that he can begin to move the vehicles they had.

Pedro takes a moment to reflect with us and shares that he had not understood the Knights Templar strategy for for blockading highways, which consists of opening up the roadway every once in a while and allowing vehicles to pass though in order to gain access to more vehicles to burn as the ones they have run out.

With his family kidnapped he has no other option, he starts parking cars across the highway and setting them on fire along with the Templars for over an hour when over one of their walkie-talkies a warning is heard that the self-defense groups are headed that way. The young men get on their motorcycles and flee leaving Pedro behind, who hides behind a pedestrian bridge and waits for the arrival of the self-defense groups.

Suddenly, he recognizes some of the armored vehicles he had seen on TV and he decides to leave his hiding spot. More trucks arrive with signs which identify them as self-defense groups from Tepacaltepec and they immediately recognize the pastor.

“What are you doing here?” asks one of the self-defense group members.

“I am burning vehicles,” responds Pedro.

“What do you mean burning vehicles?” ask the men from the self-defense group.

A little later the self-defense crew returns with his truck and his family, and gives him directions so that they can go on their way, avoiding Apatzingan. They tell him to go through Paracuaro and that there self-defense members will show him the dirt road to Tancítaro from where he can make his way to Buenavista, which is now controlled by the self-defense groups, and a route through which the Christian family can make their way home. Pedro and his family thank the self-defense crew who hours later are able to liberate the communities of Antunez and Nueva Italia from the Knights Templars’ control.

They traveled a little more than a kilometer, when as they passed a small town near the road, once again they are intercepted by the same young men from the Templars. They force Pedro to get down from the vehicle and they blame him for allowing the self-defense crew through; they tell him they are going to take him to their superior so that he can be held accountable. Pedro tries to explain that it was impossible to stop the self-defense crew from advancing, who were traveling in 40 trucks, but his efforts are in vain and he is taken along with his family to a nearby location a few streets from the highway where their boss was stationed.

“I don’t care, you let them through, now you are going to die,” responds the Templar boss as he points a gun at Pedro’s head. Suddenly two helicopters fly overhead, one from the military and one from the federal police and gun shots can be heard coming from Antunez. Through the Templar’s walkie-talkies it can be heard that the self-defense groups have entered Antunez, and they are ordered to report in and keep a lookout.

Another group of Templars arrive with more hostages: a family with mother, father, and girls younger than 10-years-old and three young workers who also had been used to to set vehicles on fire at different locations on the highway towards Apatzingan. All the hostages are taken to a house guarded by a member of the Templars with the promise that the others will return to kill them.

By then it was 6 pm and it had been complicated to say the least. Both families’ daughters are uneasy and hungry, which prompts Pedro to ask the guard for something to eat. The young man gives them some cans of beans and in the kitchen they find some cornmeal with which they make tortillas and they eat.

Despite the fact that Pedro is a man of faith, and he knows that he will eventually die, he gets the shivers and feels as if his soul is leaving his body.

By 1 am another family, which was also taken hostage on the highway arrives. Facing certain death, they spend their time telling stories, some pray, while others try to cheer each other up, and they all say good bye. After about 3 hours, they hear over the guard’s walkie-talkie that there will be a shift change at 7:30 am.

The father with the four daughters convinces Pedro to go with him to the guard and ask to be killed in exchange for their families’ lives, and that they do not want their daughters to see them die. The guard responds that at 7:30 am there will be a shift change and that at that time he will give them two minutes to escape, that both families with daughters can get in the truck and leave, but that five minutes later he will report them as having escaped and if they get caught on the highway they will be killed. Minutes before fleeing, both groups of parents remove the church signs from the truck in order to avoid being identified on the road.

At 7:30 am the guard leaves, playing dumb with the hostages behind him. They get in the truck and they leave. On the roadway there are still some smoldering vehicles but the roadway seems calm.

Both families arrive in Apatzingan where the other family’s father has a house and he offers them asylum. Pedro thanks him but he feels unsafe, because most probably they are looking for his truck and he feels it is safer to continue on their way. They go their separate ways. On the road they come upon a traffic light that turns red; and a windshield cleaner as well as a gum vendor approach the vehicle. They are lookouts for the Knights Templar. They come closer to the truck and ask if they had seen a similar truck except with church signs. “By the grace of God,” Pedro says they had removed the signs. “No, we have not seen it,” he responds. The windshield cleaner tells him that they have been tracking the truck from Antunez, and that no one is to leave Apatzingan without permission, much less because of what had happened in Antunez and Nueva Italia earlier.

The windshield cleaner states that his shift change is coming shortly and that he will let them through, but that if they are seen they will be detained. He recommends they leave quickly in order to reach the closest military checkpoint, where the Knights Templar are not as powerful.

Pedro speeds up to escape the hell they had been in for the last several hours. He knows exactly where the checkpoint is and he knows they are close.

The family is able to get through the checkpoint. Some meters ahead of the checkpoint Pedro stops the car, they get down, they hug one another, they cry, they vomit from nerves and tension. They are certain their lives are safe.

Before finishing his story, Pedro says he doesn’t know what happened to the other family nor the three young men who stayed behind with the Knights Templar. He says he has tried to locate them because they exchanged numbers, but has not been able to reach them, but hopes they are fine.

Pedro concludes, ” I was a member of the Knights Templar cartel for two hours, because I was forced and coerced to cooperate in hopes that they would give me back my family. That is my story. God bless you.”