Popular Assembly of the Peoples of Oaxaca (APPO) activist Emeterio Marino Cruz said that he will protest the liberation of the five municipal and state police officers accused of the beatings he suffered on July 16, 2007 in the vicinity of the “Guelaguetza” auditorium.

“It is not just, it makes me furious; I can’t speak or walk properly because I was left in such a bad way.”

The police officers: First Commandant of the Municipal Police of Oaxaca de Juárez, Alfredo Luis Santos; sub-official Alejandro Franklin Ortiz (bodyguard of the assassinated coordinator of Public Safety, Roads and Transit of the City Council of Oaxaca, Aristeo López Martínez); Agent Nemesio Vásquez Matus; State Preventative Police Agent Javier Díaz Miguel; Eugenio Silva Santiago, Agent of the Commercial, Industrial, Banking and Auxiliary Police; and Alejandro Barrita Ortiz, member of the escort of this corporation’s director who was likewise assassinated, were all freed two nights ago from Tanivet state prison thus ending their sentence of three years, two months and 9 days as dictated by the Second Judge of the Criminal Court. 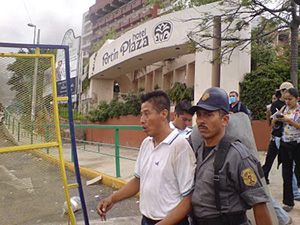 The APPO activist said that this conviction reflects the decision of Governor Ulises Ruiz Ortiz because it is absurd given the neurological and linguistic damage provoked by his beating.

“He’s leaving (his mandate) and does not want to leave traces of what he did”, he assessed.

Furthermore, he underlined that the Second Judge of the Criminal Court had promised to not liberate the officers until they had covered reparations payments for the harm he suffered.

“They beat me, they tortured me, they almost killed me, without having committed any crime; they left me in a horrible state”, he pointed out.

He highlighted that his family along with teachers from the Sección 22 of the Sindicato Nacional de Trabajadores de la Educación (SNTE – National Union of Education Workers) and followers of the APPO will meet this coming Tuesday outside the Second Criminal Court to protest the freeing of the police officers and to demand reparations accordingly for the harm he has suffered.

Not even 300 thousand pesos are enough because I have been left in a condition unfit to work; that’s nothing. I have to take pills every day, and one little box costs 1500 pesos”, he pointed out.

The five police officers were tried for aggravated assault and abuse of authority – criminal record 123/2007, but every last one was acquitted.