August 23, 2012 — How do we keep fighting in the face of adversity?  Where do we get the strength to demand justice when impunity reigns? How do we make it clear that the social fabric has not been reconstructed and that no reconciliation is possible while true justice still does not exist? How do we expose the depravity of a government that tries to buy loyalties with money without hurting those who accept this option out of necessity? How do we stir and mobilize the spirit of people like Lorenzo Sampablo Cervantes, who, whether inside or outside the APPO, waged a struggle for real social transformation?

There’s no easy answer to any of these questions without deep, honest reflection; yet the family and friends of former architect Lorenzo Sampablo Cervantes insist on following the path of historical memory and struggle, organizing and participating in activities like those held on August 22, 2012. These weren’t an empty homage, but a reaffirmation of the struggle for true social transformation, the struggle for which his life was taken, and, at the same time, an exposé of the complicity of Gabino Cue and his ill-named ‘government of change’ with the assassins of the peoples of Oaxaca.

Ulises Ruíz Ortíz, Lizbeth Caña Cadeza, Jorge Franco Vargas, Lino Celaya Luria, José Manuel Vera Salinas, Manuel Moreno Rivas and every one of the killers who still drive down the streets in cars, vans, motorcycles or patrol trucks marked with state and local police insignias and who rode in the Caravan of Death and perpetrated the crime that morning six years ago, are still free, basking in impunity.

At 9 0’clock in the morning, August 22, 2012, the family and friends of Lorenzo Sampablo began the activities with a religious service on the spot where his life was taken, there on Emilio Carranza and Eucaliptos in the Colonia Reforma, where the bullet holes left in those early morning hours can still be seen. Several dozen people were there to show their support for the family, and at noon, everyone moved on to the Zócalo.

A backdrop fashioned by the skillful hands of several young people was placed outside the government building where the events took place that warm Wednesday afternoon. Mare, in her conscious hip-hop style, lifted the spirits of everyone there as she sang messages to women, political prisoners, and all who spread social consciousness; everyone joined in on the verses of “Cuanto más,” (How Many More?) dedicated to the architect.

Taking their turns at the microphone, Chinto and professor Saúl sang corridos and songs born in the heat of the movement, recalling key moments in the struggle. To close the act, Raíces alternated with street theater taken straight to the door of the office building, a move that made the security guards visibly nervous.

It was a creative demonstration, in which steadfastness in the demand for true justice contrasted with the tone of another event going on at the same time in the same building between the government and several organizations representing people affected by the movement of 2006. In the event held in memory of the Lorenzo Sampablo, there was a reaffirmation of a struggle that has never ended, of prolonged injustices, in which the family made it clear that true justice cannot be reduced to “economic reparations” and  false promises made by new district attorneys that fade away just has their campaign promises have done. One more time, six years after that malicious crime, the unbreakable spirit and cry of dignity remains the same. No forgiving, no forgetting! Punishment for the killers of Sampablo Cervantes! 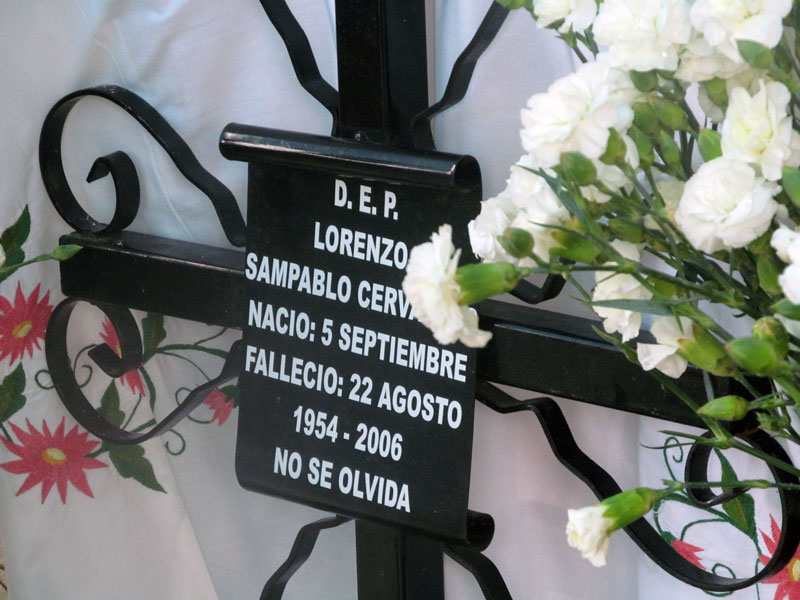