The project is called Centroamérica Indígena and is a replica of the controversial México Indígena project (2005-2008), which was denounced by the Union of Organizations of the of Oaxaca (UNOSOJ). The group pointed out that the geographers of the University of Kansas who were in charge of implementing the project had not told the affected groups about their connections with the Foreign Military Studies Office (FMSO).

The Bowman Expeditions gathered information for the database of the Human Terrain System, used as part of the United States military strategy in the wars in Iraq and Afghanistan. In the case of Mexico Indígena, the studies were carried out in the Huasteca and the Sierra of Oaxaca, places where there is strong resistance to the Land Entitlement Project PROCEDE, financed by the World Bank for the purpose of doing away with the system of communally-held lands and replacing it with individual ownership.

The Demarest Factor: Communal property and the supposed “incitement to violence”

Lieutenant Colonel Geoffrey B. Demarest, assigned to the Mexico Indígena Project and a participant in the Bowman Expedition, known as Comuna 13 in Medellin Colombia, has repudiated communal property a number of times. In one of his texts entitled “Geoproperty: Foreign Affairs, National Security and Property Rights,” he stresses that “informal and unregulated land ownership fosters illicit use and violence,” and suggests that the only solution for these breeding grounds of crime and insurgency is privatization through land entitlement.

In Honduras, OFRANEH has strongly denounced the activity of the World Bank through its Land Administration Program Project in Honduras (PATH, in Spanish), which has promoted Chapter III of the Property Law, specifically Article 100, currently in force, that is designed to revoke communal titles issued by the State in recent decades.

Our organization appealed to the Inspection Panel of the World Bank, pointing out violations of the operational directives having to do with indigenous peoples. In its Report, the Panel stated that the State of Honduras violated Convention No. 169 of the International Labor Organization (ILO) upon failing to recognize the right to consultation with regards to the development of the Law in question, and also noted a series of irregularities committed by the World Bank in its administration of the PATH project.

The current post-coup government in Honduras, through the law governing Special Development Regions (RED, in Spanish), also known as the Model Cities Project, planned to auction off land to foreign investors consisting of an area inhabited by 24 Garífuna communities. The RED law was replaced by the Law of Employment and Economic Development Zones (ZEDE), and by the new Law for the Promotion of Development and Public Debt Restructuring Act (the Mortgage Law), which has not yet gone into effect.

The breaking up of communal property that still exists in the Garifuna communities is an example of the double-speak of state officials and financial organizations that are aware of the domino effect of the land sales that will take place through property individualization.

A State offensive against the indigenous peoples of Central America

In recent years, the implementation of the Mesoamerica Project, previously known as the Plan Puebla Panamá, has led to repressive measures against indigenous peoples that have stated their opposition to the construction of hundreds of dam and reservoir projects in their territories as well as exploitation through mining. From San Cristobal Barrillas (Guatemala) to Tabasara (Panamá), a cry has been raised in indigenous communities that were never consulted, yet see now their habitats being flooded by the dam projects.

The right to Consultation and Free, Prior, and Informed Consent established in Convention 169 of the ILO, which has been signed and ratified by almost all the Central American countries, is systematically violated. All indications are that both national and foreign investment is more important that safeguarding indigenous peoples and their cultures, which are intimately tied to Mother Earth.

The reaction of peoples to territorial plunder and the resulting displacement of the populations have aroused an enormous interest on the part of armies and repressive forces that seek to neutralize peaceful claims being made by the peoples in resistance and some of their organizations.

FMSO personnel regard Central America as part of the United States borderlands, and in the name of the supposed war on drugs, the US is directly intervening in the area with the creation of military bases and now the Centroamérica Indígena project, through which they intend to generate a database of the terrestrial geography of the 59 peoples inhabiting the Isthmus.

Between May and September of 2011, the geographers at the University of Kansas associated with the United States Army, carried out rigorous mapping of the territory ranging from Cabo Camarón to Río Coco, including the Garífuna communities where people were never consulted.

What a coincidence that in May of 2012, the Northern Coast of Honduras was the target of a military operation that included psychological operations (psy-ops). State Department helicopters engaged in low nocturnal flights over cities and communities, and these air missions culminated in the massacre of innocent Miskito people by the Río Patuca.

The obvious militarization that besets Central America after the unstoppable increase in violence, which by the way, is almost nonexistent in the indigenous communities, is part of a strategy of the subjugation and looting of our territories, where a good part of the remaining “natural resources” are found. 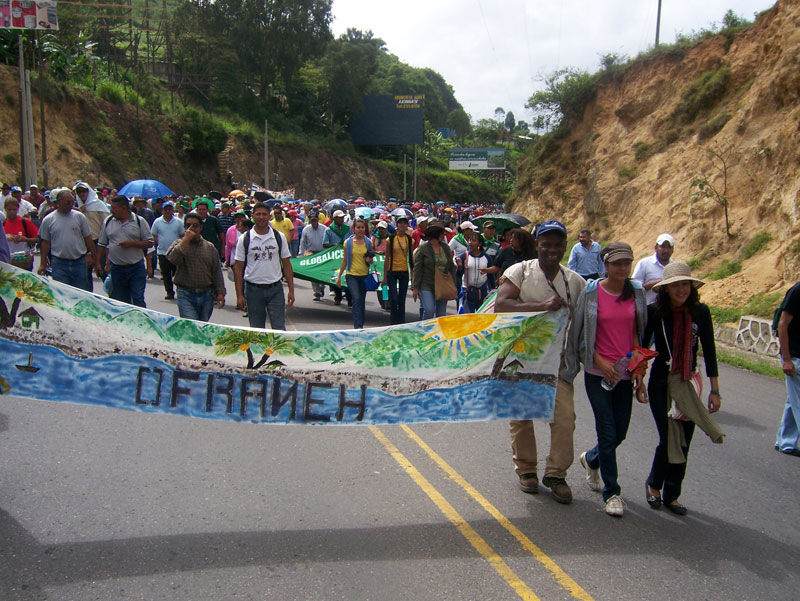