Day and night, Nestora Salgado García inhabits a dark world of artificial light. Fifteen days pass without seeing a ray of sunlight. She has no physical contact with anyone, she is only allowed a hug and cannot touch her daughter or her sister when they visit. Not even the guards speak to her. Instead of the four hours every 12 days for visits that she has the right to, after her family members pass the ordeal of security checks, they are left with only two and a half hours. She doesn’t have the recommended medication for the spinal problem she has suffered from for 12 years. In prison, Nestora lives in punishment for her bravery.

Nestora is an activist, a community leader who loudly and unabashedly denounced the local authorities of the municipality of Olinalá, in the mountains of Guerrero, of complicity with organized crime. Her role as coordinator of the Community Police was conferred upon her in an assembly. This legitimate law-enforcement mandate, recognized by the very government of Guerrero, led her to order, on August 16, 2013, the arrest of comptroller Armando Patrón Jiménez, accused of cattle rustling and of presumed participation in the killing of two farmers. The local official was transferred to the regional House of Justice to be processed according to a community system legitimized in the region for the past 18 years. This isn’t an apparatus of self-defense groups, but an entire system of security, prosecution and administration of community justice, upon which the state government has conferred legality and even financial support.

However, the arrest of the comptroller caused people close to him to accuse her of kidnapping. Five days later, the force of the state arrived aboard 15 military vehicles. The soldiers handed her over to the Marines, who then put her on a plane and immediately afterward Nestora would see the doors of Tepic prison opening. Hours of uncertainly passed, she wasn’t given any information or even allowed to use the bathroom.

Life in prison is doubly hard for a woman with the life and qualities of Nestora. Saira, her daughter, says that in spite of everything her mother remains strong and steadfast after nearly seven months of confinement. “She is alone in her cell, but my mother is strong and she tells me that she will not allow the suffering to kill her, that she will not give her attackers that pleasure.”

After four months of bureaucratic red tape prevented her from visiting her mother, Saira has been able to see her twice. She travels to the jail every 12 days, complying with all the prison’s security regulations. The relatives of other prisoners, she says, are allowed into the visiting area at 12 or 12:30pm. She is let in at 2 or 2:30pm. The difference in treatment is clear, as it cuts almost in half the time to see her, which is from 1 to 5pm.

After walking past the “mocking laughter of the guards,” Saira goes through the security checkpoints. Nestora is not held in the building where she meets with her daughter and other family members. She is taken handcuffed out of her cell and put into a truck. She doesn’t know exactly where she is. When they finally meet they are allowed a quick hug, the rest of the time they are prohibited from touching, a plastic table with a Coca Cola logo separating them. The visit happens on a basketball court with five seating sections.

After the visit, the guards take Nestora away in handcuffs. Only she comes and goes in shackles. The rest of the prisoners go unrestrained. “They don’t even treat the murderers like they treat my mother,” laments Saira. They violate all her rights, she says.

Nestora wakes up at five in the morning every day for her first roll call. She is alone in her four meter by four meter cell. There she eats breakfast and spends the rest of the day without the guards speaking a single word to her. When she is taken to be with the rest of the population, she is prohibited from speaking with the other prisoners. Nestora can make one phone call every nine days and receive visits of up to three people every 12 days.

They keep her away from the others, she can’t have books and, for example, from February 27 to March 11, she did not see natural light. “With tears in her eyes she told me that it was her first contact with the breeze,” says Saira of their recent meeting. Rarely, they let her go out in the sun for one hour a week. They don’t allow her to play sports or any other activity, as the others do. They just began to provide her with clean water, as she had to drink from the tap, which “includes rocks” and she has severe pain in her kidneys. Medication? None.

Nestora Salgado is the sixth of seven children. She married at 14 and had the first of three daughters at 15. They motivated her to go alone to the US, where she gained citizenship as “she didn’t even have a traffic ticket.” She came and went from the US, “always helping the people in the mountains to meet their needs,” until in October 2002 a car accident injured her spine and led her to spend more time in the US to receive medical attention.

The head of the Olinalá Community Police is not just any woman. As soon as she had healed, she returned to her town and due to the growing wave of crime perpetrated by organized crime, she decided to accept the leadership role in the community and to involve herself in the process. She quickly stood out due to her determined attitude and her willingness to denounce criminals as well the officials who acted in complicity with them. The cost has been high, but, Saira insists, “She says that when she is free, she will return to her work with the Community Police.”

She now spends her days again studying grade school, reading the three “worksheets they allow her as her only activity.” As a US citizen, the US embassy has been following her case, but even so, the conditions of her imprisonment are inhumane. “They are punishing her for her struggle, because of that she is a political prisoner,” Saira insists. 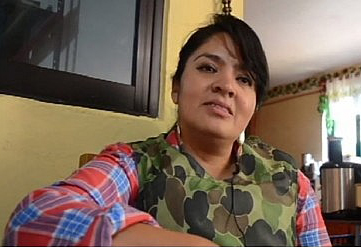