The Civic Council of Popular and Indigenous Organizations of Honduras (COPINH) calls public attention to today’s murder of our compañero Nelson García, from the Río Chiquito community in the Cortés Department, at the hands of two unknown persons.

We regrettably inform you that compañero Nelson García was murdered when he arrived at his mother-in-law’s house to have lunch, after spending all morning helping move the belongings of displaced families from the Río Chiquito community.

The murder occurred in the midst of an eviction carried out against the community of Río Chiquito in the Río Lindo area, in the Cortés Department, during which approximately 100 police officers, 20 military police officers, 10 soldiers and several people from the DGIC (General Criminal Investigations Administration) invaded the territory reclaimed by 150 families, on which more than 75 had built their houses with the materials and efforts at hand.

The eviction took place at noon today, using tractors and heavy machinery to destroy the wood houses that the compañeros and compañeras from COPINH had lived in for almost two years, leaving them without a roof over their heads. Similarly, they destroyed the community’s garden and fields, using tractors to destroy the yucca, sugarcane, banana and small corn fields, violating all kinds of rights. They even destroyed an artisanal oven and killed chickens belonging to the community.

The community of Río Chiquito has protected its territory since it was first donated to the women of the community. However, they have been attacked by the municipal authorities, especially by the former mayor, who used three front men in order to displace the compañeros and compañeras and to sell the land.

Compañero Nelson García was an active member of COPINH in defense of the right to housing, we remember him for his active participation in the process of reclaiming the land and establishing the community of Río Chiquito. We lament this new death, 13 days after the vile murder of our General Coordinator, Berta Cáceres.

The murder of our compañero Nelson García and the displacement of the community of Río Chiquito add to the war against COPINH, which seeks to do away with its more than 22 years of advocacy, resistance and building. 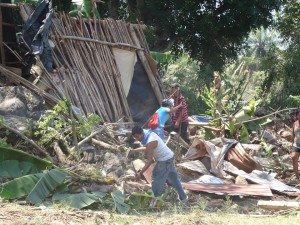 Since the murder of our compañera Berta Cáceres we have been subjected to a large number of incidents which demonstrate the complete lack of interest on the part of the Honduran State to safeguard our lives and the work we carry out. As well as its disregard in implementing the preliminary injunctions accorded us by the Inter-American Commission on Human Rights (CIDH). The injunctions were issued on March 6 and today, nine days later, they murdered a compañero.

How is one supposed to trust the State’s investigation if it is criminally harassing the coordinating body of our organization with the statement that it is investigating our supposed participation in the murder, while it doesn’t investigate the sources of the threats?

How is one supposed to believe that justice will be done in the case of our leader Berta when they won’t implement the measures necessary for the protection of her family, and the daughters and compañeros of our compañera Berta have been chased by an armed man in the city of Tegucigalpa during meetings with the authorities?

Since the day of Berta’s murder, the offices of COPINH in La Esperanza have been monitored by unknown persons, intimidating those who are still resisting, following the legacy of our leader.

Similarly, the compañeros and compañeras of the community of Río Blanco suffered attacks when they traveled to the city of Tegucigalpa in order to present their case to entities such as the Ministry of the Interior and representatives of the diplomats of the G16.

In addition, there was an incident in which compañeros from the community traveled to Río Gualcarque and were attacked with shotgun fire by security guards from the Agua Zarca hydroelectric project that fortunately did not wound any members of the community.

All these attacks form part of an extermination plan against our organization and we are calling for national and international solidarity in order to fight against it.

We demand an end to the persecution, harassment and war against COPINH.

We demand that the Honduran State respond to the death of our compañeros and compañeras and for there to be no more impunity.

We demand justice for our compañera Berta Cáceres.

With the ancestral force of Lempira, Mota, Etempica, Berta, our voices rise up, full of life, justice and peace.