“¿Quién dice que todo está perdido? (Who says all is lost?)” sang the Taller del Sur at the cultural festival held last September 25 as part of the Activities for the Freedom of the Defenders of the Water and Life of San Pedro Tlanixco.

And five days later, as the round of activities closed with a rally and march around Santiaguito prison at Almoloya de Juárez, the answer was clear. Nobody. In spite of the vicious repression brought down on this Nahua town by the State of Mexico’s (in)justice system, there’s no end to the struggle to free the eight guardians of the territory of San Pedro Tlanixco. On the contrary, as of 2014, the movement is rebuilding and getting stronger.

You are not alone! Free all prisoners in struggle! Ten years ago, the same shouts cut through the walls of this same prison when a camp was set up outside it to support the 220 men and women arrested and tortured in San Salvador Atenco on May 3 and 4, 2006. After a massive four-year struggle, the State finally had to release all the Atenco prisoners. 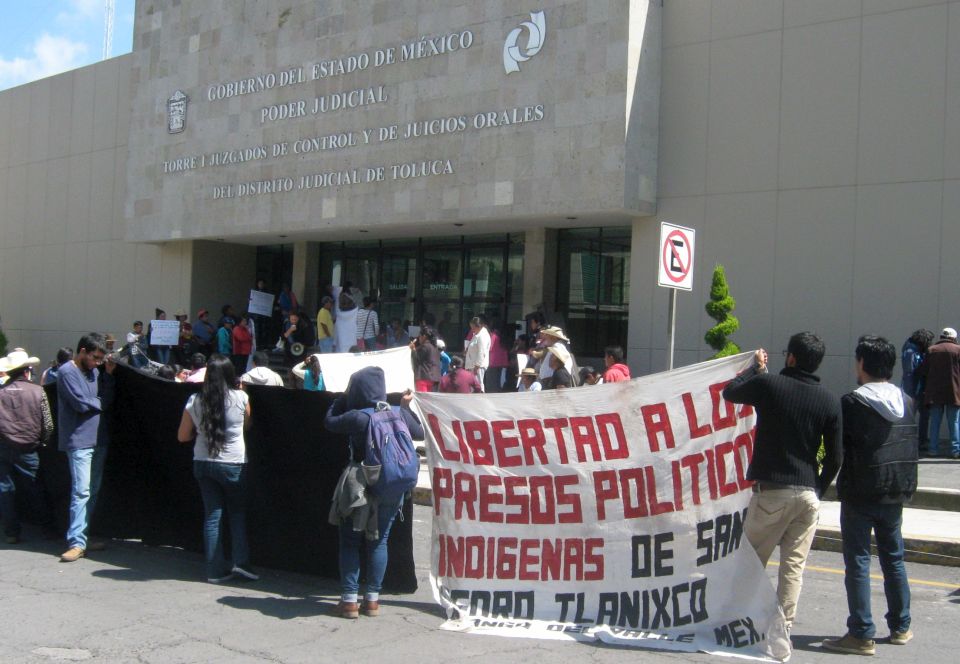 One of the aims of last Friday’s action outside Santiaguito was to raise the spirits of the Tlanixco prisoners and let them know they’re not alone. And in view of an almost total commercial media blackout, the action also sought to tell the world certain things: that the capture of these prisoners involved an all-out war by hundreds of police agents against a peaceful town labeled as “terrorist”, that jailing these activists is one of the great injustices in Mexico today, that their only crime is defending the water and life of their people and that they should be immediately released. 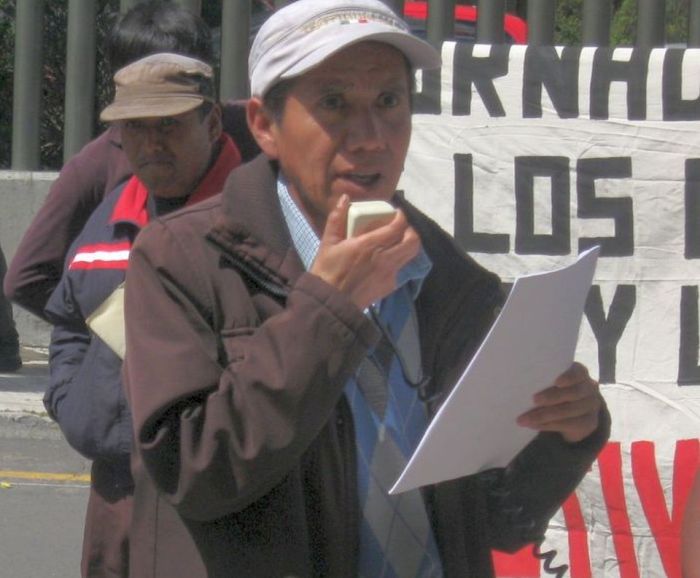 Outside the prison, Benito Álvarez Zetina read a statement signed by hundreds of people, collectives and organizations in Mexico, Latin America and Europe, which says in part:

Many of us in the different geographies of Mexico and the world have learned of the injustice, repression and plunder perpetrated against the Nahua indigenous community of San Pedro Tlanixco for the last 30 years –first, through the construction of the toll highway from Tenango del Valle to Ixtapan de la Sal, then through the plunder of water from their springs by national and transnational flower businesses in the neighboring town of Villa Guerrero, which led to the death of one of their business leaders, and since 2003, the State kidnapping of our comrades. 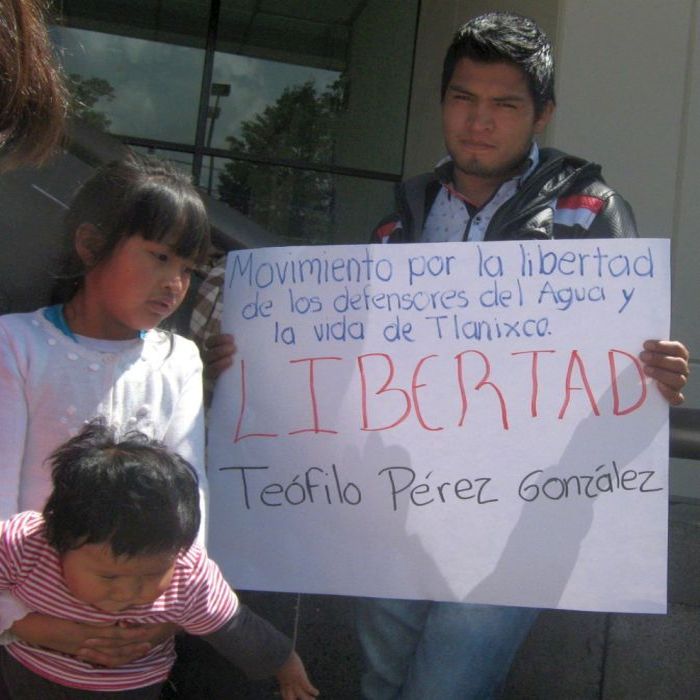 The demands of the signed statement and the action outside the prison are:

-The immediate release of Teófilo Pérez González, sentenced to 50 years; Pedro Sánchez Berriozábal, to 52 years; and Rómulo Arias Mireles, to 54 years in prison.

-The cancellation of arrest warrants for Alejandro Álvarez Zetina and Rey Pérez Martínez, who have not been able to live in their homes for so many years.

Last May 28, after a ten-year delay in sentencing, and thus, a ten-year extension of unjust imprisonment, the prosecution finally rested in the trials of Lorenzo, Marco Antonio, and Dominga. Their cases are now in the hands of Toluca Judge Maximiliano Vázquez Castañeda, who has said he will “take a look at the file when he has time.” 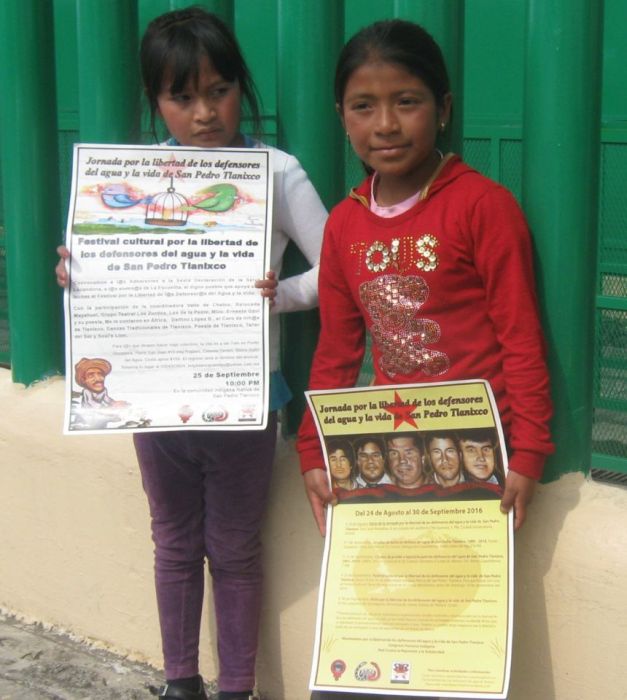 When Yolanda Álvarez, the wife of Lorenzo Sánchez, went into the prison to deliver the signed statement to the judge during last Friday’s rally, she was treated with a total lack of respect. In an interview after the rally, she said:

They told me the judge couldn’t receive us because the sentencing process is underway and he cannot take either side– that of the offended parties or that of those who are awaiting sentence. The only person we were able to see was his secretary, who had a high-handed attitude and was not the least bit interested in listening to our explanation. All he wanted to do was talk to someone else on the telephone. We don’t want any more sentences of 50 years, or longer. The judge should acquit our comrades because they’re innocent and never should have spent a day in prison. The authorities have violated all their rights and guarantees as indigenous people, but they don’t even recognize us as a Nahua indigenous community.

Every week, Yolanda visits her husband, and she tells us that the restrictions are increasingly harsh and the prison conditions worse than ever.

Our prisoners used to be able to get visits from any family member or friend, but now, only a spouse, child or parent can visit. They need visits from more people, but they’re treated like criminals and deprived of these visits. Their everyday life is really hard. Lots of times they don’t have enough water to drink or to use for showers, flushing the toilet, or washing clothes. The guards turn the lights off and on whenever they want to. The food is disgusting. It’s hell in there. The cells are small and overcrowded. Lately, they’ve been sick a lot. My husband often gets sick at his stomach, but the doctor doesn’t prescribe any medicine for him and won’t let me take medicine to him or bring in an outside doctor to examine him. Our comrade Dominga has also been very ill. She’s had two operations and still doesn’t feel well. Her health has surely been damaged by these horrible conditions. She’s also innocent and should be immediately released.

On August 11, 2014, a motion was filed with the federal judiciary for a protective order in the case of Lorenzo Sánchez, but one year later, on September 25, 2015, Judge Victorino Hernández Infante denied the motion, saying that: “the nation’s justice system neither supports nor protects Lorenzo Sánchez Berriozabal”. 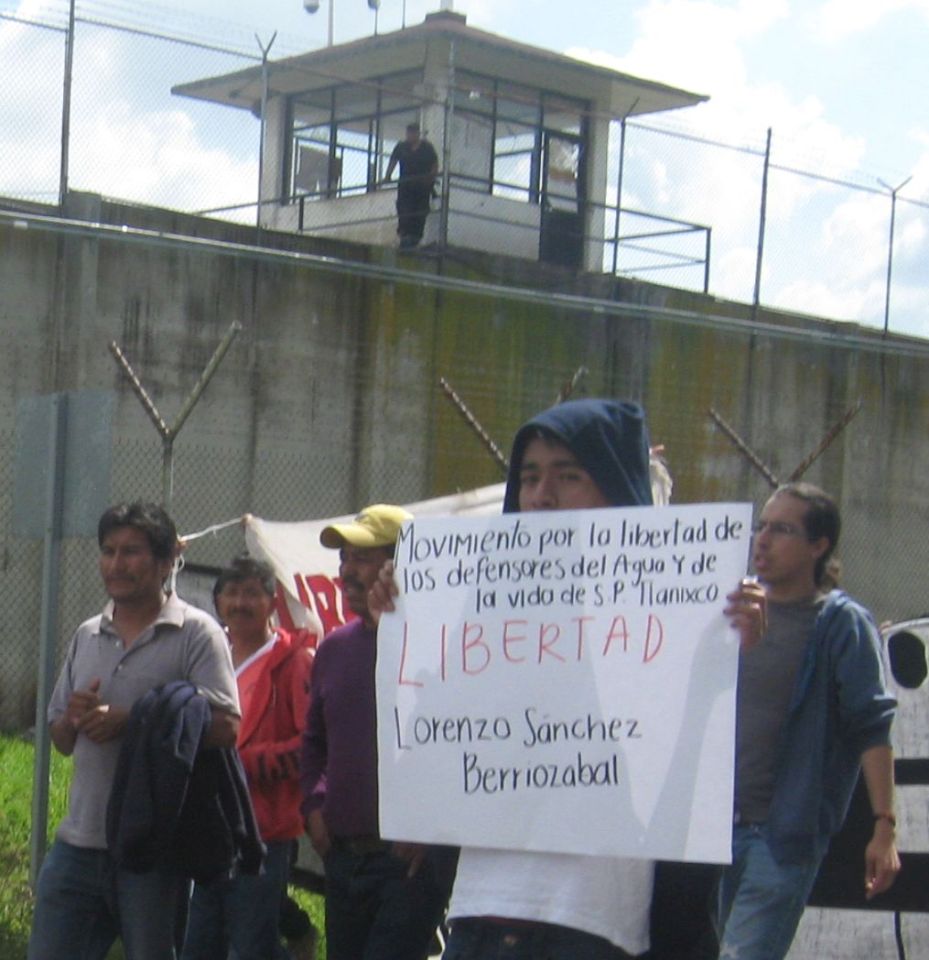 Mexico’s drug lords, on the other hand, have gotten a different kind of treatment from Victorino Hernández Infante. On March 7, 2015, the judge issued an order guaranteeing Joaquin “El Chapo” Guzman’s human rights, including his right to medical attention and protection against cruel and inhumane treatment. Only two weeks before, on February 25, 2015, El Chapo and several of his former enemies had presented a complaint to the National Human Rights Commission denouncing mistreatment, overcrowding, and unhealthy conditions in the cells and in the food they are given.

On September 12, 2015, the former head of the Gulf Cartel, Mario Cárdenas Guillen, also filed suit, alleging a number of different kinds of mistreatment. Ten days later, Judge Victorino Hernández Infante ordered an end to certain acts, including “serving rotten food of precarious quantity and quality on dirty, unhealthy trays, thereby placing the plaintiff’s personal integrity and life at risk; harassment; psychological torture; the obligation to do squats naked; imprisonment in unsanitary cells with the lights on 24 hours a day; beatings and other forms of mistreatment.” 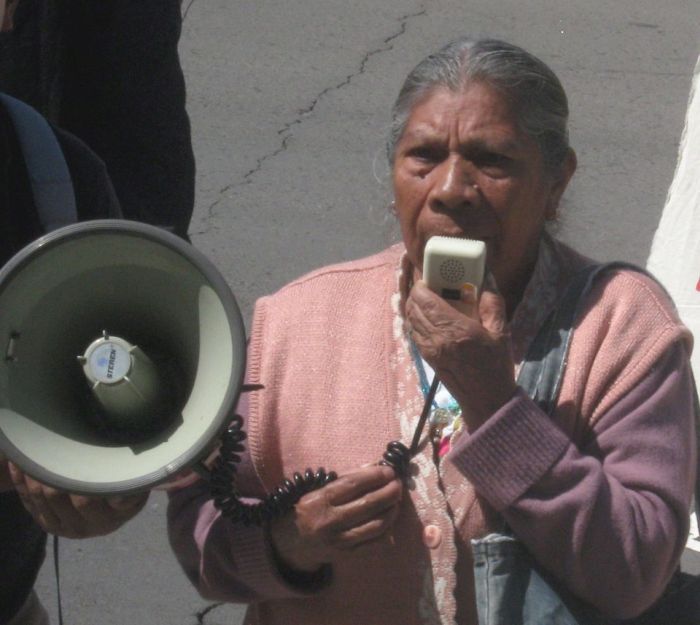 At the rally, Francisca Álvarez, who has been a key figure in the community life of San Pedro Tlanixco for years, spoke of Judge Maximiliano Vázquez Castañeda’s refusal to see Yolanda Sánchez.

Compañeros, we see that the judge said he wouldn’t see our comrade Yolanda, the wife of one of our prisoners. And why not? Because he didn’t want to make a commitment to her, right? And why not? Because beforehand, he had spoken to someone else. So he said to himself: I won’t see them, and besides, I don’t recognize them as an indigenous people. But he’s mistaken, because we are an indigenous people. He should remember that we govern ourselves based on our traditions and customs, and our people still engage in bartering. And he should remember that this rally is only the beginning. We’re going to keep up the struggle and we won’t stop. Today there are only a few of us, but next time there’ll be more. The judge should be conscious of this. He’s mistreating our comrades. Why? For money….

Compañeros inside, don’t worry. Things might be going against us now, but you are not alone. We can count on people in Mexico, and people from other countries to support us. This is only the beginning. We’re not going to leave you alone. Zapata lives! The struggle goes on! Zapata lives! The struggle goes on and on! We want freedom for our comrades. The judge should think it over. He should sleep on it. And we’ll see what he says next time. We’ll see if he deigns to receive our comrades. I thank you all. 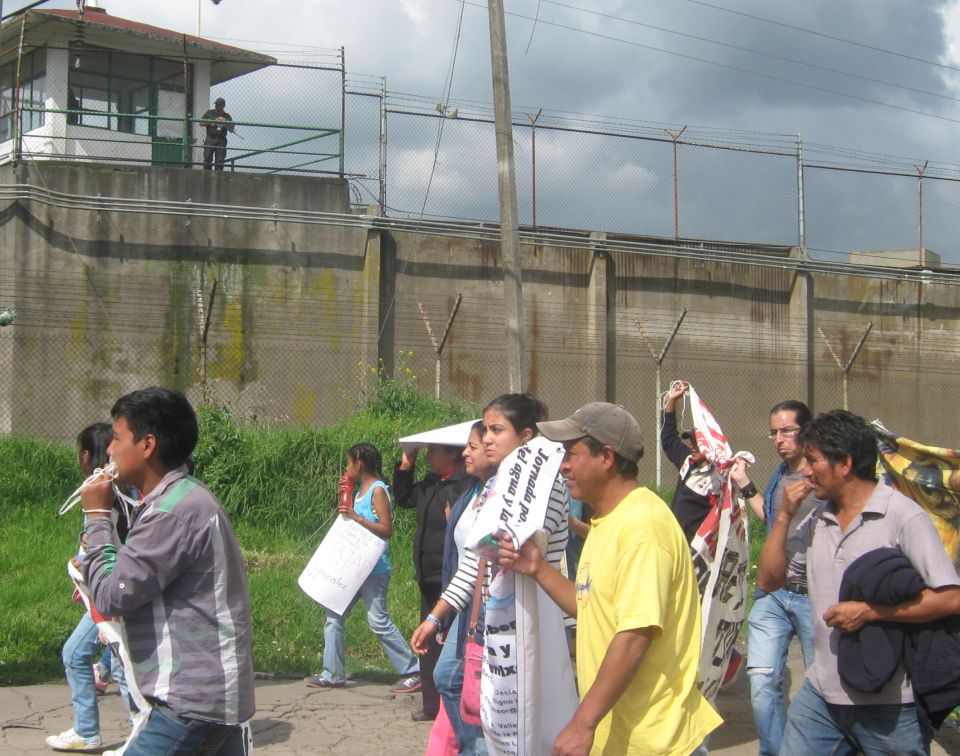 In a brief interview, Francisca explained that the person who visited the judge earlier in the day was the sister of the man who died back them. “She probably didn’t go there just to talk to him. Maybe she gave him some money, and that’s why he hid from Yolanda,” she said.

With regards to the activities that just came to an end, Francisca commented that they were positive because “even though there were just a few of us, we’ve supported each other in our work. The activities were good, but we hope there’ll be more people next time.” She added:

When we all walked through the streets of Tlanixco with the drummers last Sunday, it was good that people came out to see what was happening. But they’re afraid to join in because of all the repression we’ve had. They say, “If I go with them, they’re going to put me in jail.” They’re afraid of the government. It’s not exactly like before, but there’s still a lot of fear. I just hope these activities bring good results for our comrades in jail and that the judge stops thinking only about his money and treats them like human beings who are innocent.

In an interview, Rosario Peralta Sánchez said that he really liked the action outside the prison and thought all of the activities were favorable.

For us, it’s a success that more people have been with us, that more people are supporting us. It’s one small step forward, very firm and concrete. The night after the cultural festival, we all made an evaluation and commented that when we walk through the streets of the town all together, people do come out. They see us, and they know what’s going on. But we agreed once more that people’s fear is paralyzing them. We have a big job to do in the community. We must help people lose their fear and join with us. But people’s support has been encouraging, and little by little, we´re getting stronger. I thought today’s activity was excellent, really good. We hope our comrades inside are encouraged and that the judge sees that they are not alone, that more people are supporting them. We also hope there’s more support for all the other political prisoners in the country and the world. 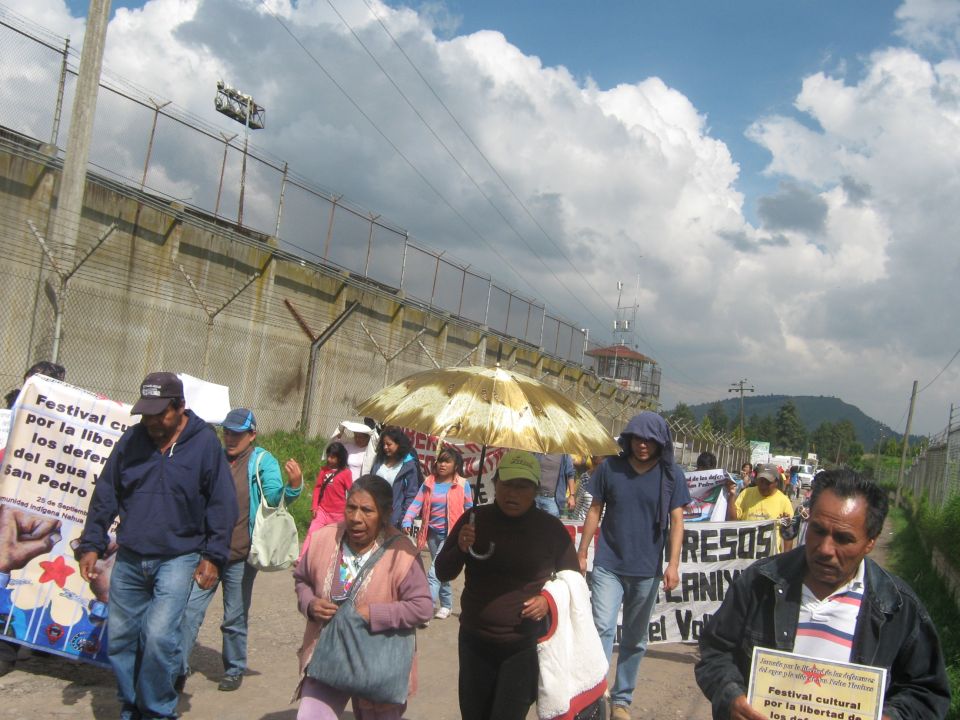