Our demands: Freedom for political prisoners. Live presentation of disappeared people. PFP and Ulises Ruiz out of Oaxaca.

December 10th, 2006 – APPO writes: In Oaxaca, in the midst of military personnel disguised as police, Human Rights day was celebrated with a multitudinous march that started out from the Viguera intersection.

With this mobilization, hundreds of thousands of Oaxacan people begin a new stage in the APPO’s struggle: Days for Peace, with Justice, Democracy, and Freedom — without Ulises Ruiz Ortiz.

Early in the morning contingents of neighborhood people, students, farmers, and teachers began to form at the Benito Juárez monument. In view of provocateurs at past demonstrations, the APPO security commission put the contingents in order and kept close watch over them. As in prior demonstrations, men and women of all ages holding up posters with photos of different faces headed the march. They are the mothers, sisters, sons, wives and husbands of the political prisoners of this regime, which views a dissident as a dangerous criminal.

After the families of the political prisoners were members of the Popular Council of the Peoples of Oaxaca, who marched despite a long list of arrest warrants that have been issued for them.

March participants included contingents from the Popular Assembly of the Peoples of Michoacán, as well as the Electrical Workers Union and senators and officials of the Broad Front of Progressive people, who were there in solidarity with this struggle.

The march began at 11:00 a.m. and as it went along, different contingents came down from surrounding neighborhoods to join in. All along the way there were signs of support—applause, shouts, signs, water, more shouts and applause.

The destination of the long line of people was the Plaza de la Danza, where there was a rally and forum in which cases of repression were denounced.

Once again we’ve shown the bourgeoisie and their State that we are in the majority and that our people will never give up. 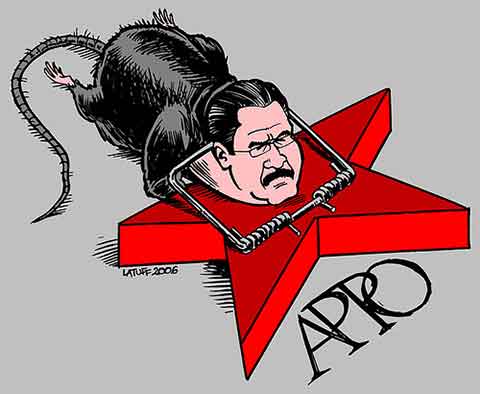 2 replies on “The People of Oaxaca Take the Streets Again”

Thanks for these updates with the link in them. The photographs were as Brad’s sister said: documents of courage.