September 5th, 2008, Scott Campbell writes: This fall in Oaxaca marks a season of commemorations. Already marches for fallen APPO members Jose Jimenez Colmenares and Lorenzo San Pablo Cervantes have woven their ways through the streets of the city, pausing at the spots they were murdered in 2006, holding ceremonies at the Cathedral. Twenty-four more such processions await Oaxaca in the coming months. That number will only grow as efforts are pursued to identify the, at minimum, eight bodies in hidden graves discovered recently in Oaxaca’s main cemetery.

In what is a lifetime for social movements and a blink of an eye in history’s ledger, a little more than two years have passed since the people of Oaxaca erupted in spontaneous but ingrained rebellion against the barbaric rule of Governor Ulises Ruiz Ortiz (URO) and all that he embodies. Mere days after URO’s storm troopers raided the city center on June 14, 2006, in an attempt to remove the encampment of striking teachers (after regrouping, the zocalo was retaken by the teachers and their supporters), the Popular Assembly of the People of Oaxaca (APPO) was formed. At its core, the APPO was a consensus-driven, horizontal grouping rooted in the millennia-old indigenous practice of assemblies. David Venegas, APPO participant and member of the anarchist group VOCAL, recently wrote in the Oaxacan daily Noticias that “the Popular Assembly of the People of Oaxaca is, naturally, opposed to power, since horizontalism, respect for consensus and respectful dialog are the fundamental principles of the assembly.”[1] For more than five months, APPO controlled the city of Oaxaca and much of the state. Not until Vicente Fox, in one of his parting shots as president, sent in paramilitary federal police on November 25 did URO regain “control.” Rather it would be more accurate to say the APPO lost physical control. Much has been written and recounted about those “days of freedom”, as one friend called them, that it is unnecessary to relate them here. For a comprehensive recounting, I recommend Nancy Davies’ The People Decide: Oaxaca’s Popular Assembly, available from NarcoNews.com.

Two years later what is left now in Oaxaca? Has the APPO been reduced to a memorial mechanism to commemorate its fallen? Is it accurate, as URO keeps insisting with epileptic vigor, that, “nothing is happening” here? Or are we seeing a movement in chrysalis, reconsolidating only to reemerge just as vibrant, but even smarter, than before?

To be sure, there are conflicting messages and what will emerge is far from predetermined. A bleak picture can easily be painted. For starters, the APPO for all intents and purposes no longer exists, in terms of an assembly which meets, makes collective decisions, and takes action. However, many organizations that were part of the APPO still use that name when publicizing their actions and sending out communiques, which ironically – or tragically – frequently denounce other organizations that were APPO members and who also use the APPO label. Obviously this creates confusion at best and dejection and disillusionment at worst.

There are no clean divisions here, but the conflict can be uneasily broken down into two general camps. Those who have chosen to use the political and social clout of the APPO to engage with the current political system and try to get what they can from it and those who reject any relationship with the system that in 2006 was killing and disappearing their comrades. This has created, as Kiado Cruz, editor of OaxacaLibre.org, wrote, “a general paralysis”[2] within the social movement and in its current formulation there is no hope for forward progress. This loggerhead has led to diminishing displays of social mobilization under the banner of the APPO, and in further blows to the now agency-less entity, these disputes between the two camps often take place publicly. 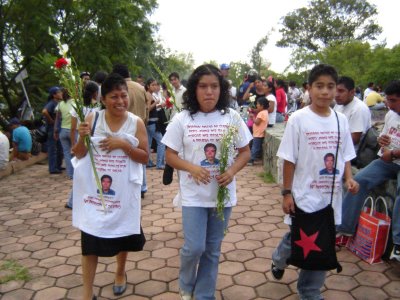 One example of the mutual animosity occurred during a march on August 10th, marking the murder of Jose Jimenez Colmenares. While the procession paused where Jimenez fell, anarcho-punks spray painted the walls of the building Jimenez was shot from. A couple of the slogans included denunciations of Zenen Bravo. “Our fallen don’t fit in ballot boxes. Understand that, Zenen!” screamed the walls.

Bravo is now a state representative in Oaxaca, a former council member of the APPO, and an organizer with the Popular Revolutionary Front (FPR), a Marxist-Leninist-Stalinist group. Elected in 2007, his decision to run on the joint ticket of the PRD-PT-Convergencia (“center-left” political parties) was a major blow to the integrity of the APPO which as a general rule rejected involvement with political parties and electoral politics. Later on in the march, German Mendoza Nube, another leader of the FPR, was heckled with calls of “traitor” when he gave a speech. FPR members rushed the hecklers – who were the anarcho-punks, members of the anarchist group VOCAL, and other – and an intra-APPO street fight nearly broke out. 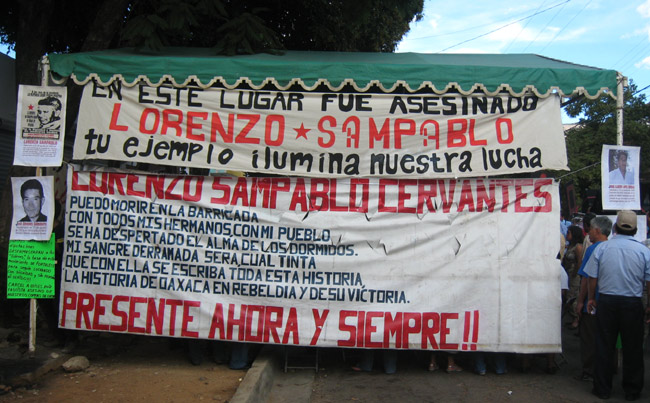 While this dispute plays out in the streets and the internet, the power-hungry members of APPO continue their dance with their former oppressors, now colleagues, while those seeking to stay true to the original premise of the APPO propose to construct something new. It is this phase of consolidation, deliberation, and reconstruction that many believe hold the promise for a successful social movement.

Many initiatives have taken place in recent weeks which display this new trajectory.

* A five day citizens’ forum was held in the upper-class neighborhood of Reforma in early August. It was inspired by the community’s successful effort to block the construction of a Chedraui (a Wal-Mart-type business) store after the company cut down 200 trees in a park there at 4am where they hoped to build their store. The forum focused not just on what to do with the denuded site but also on “participative democracy, what kind of city we want,”[3] and the problems facing each neighborhood in the city and what actions, independent of political parties and the government, can be collectively taken to deal with those problems.

* Going on right now is a “barefoot researchers” seminar organized by VOCAL and alternative education project Universidad de la Tierra (Unitierra). This free and open project meets every two weeks for five hours over the course of several months to undertake, among other things, “a systemic reflection of the economic, social and political situation in Oaxaca, with a national and international perspective, with an emphasis on autonomous social movements; that is to say, those that struggle from the grassroots to transform society without taking power.”[4]

* Most recently, the First Assembly of Community and Free/Pirate Radio Stations was held in Zaachila, Oaxaca, at the end of August. There participants created a permanent assembly for the promotion and defense of community and indigenous radio stations, one of the most important tools of the social movement and which is under constant attack by the state.[5] 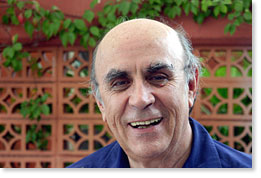 In a recent interview with Noticias, Gustavo Esteva, president of the board of Unitierra and long-time academic specializing in social movements, was described as noting, “Without a doubt”…in his 50 years of observing the social situation in Oaxaca, “I’ve never seen such movement and effervescence from below”, which should worry the government…He explained this social effervescence is “invisible to the media because there is nothing spectacular; it is not defined by marches, but the solidifying of initiatives for the generation of a new social fabric”.[6] 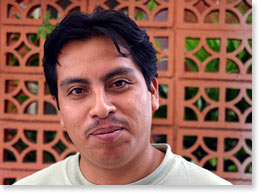 Reflecting on this new movement, Kiado Cruz labels it “communalocracy.” “It is important to reflect on our actions if our movement is really to be beyond ideologies or if we are really to be a movement that has a face and a heart that we intuitively know is based in the depths of our way of thinking, feeling and acting that we inherited from our ancestors…With this intuition we can be sure that amongst ourselves we can define the constructive means of action.”[7]

What results from these forums, seminars and assemblies remains to be seen. However, it is clear that though the APPO may be broken – just as much by internal splits as government repression – the will of the people to continue the struggle has not waned. The focus on face-to-face, direct, horizontal community organizing, and the rejection of interacting with or relying on political parties, government and hierarchical organizations, holds great promise. It ensures that what emerges will be a movement that is genuinely one of the people of Oaxaca. A movement whose direction, actions, and victories will belong to the people.

And as David Venegas writes, “Power, as much as it licks the superficial wounds put on its body by the insurrectionary actions of the people in 2006, and although it paints and adorns itself with words of social peace, reconciliation and development on its horrendous body, it will not be able to cure itself of the deepest wound caused by the people in 2006, the wound created at the source of its strength by the consciousness gained by our people of the unsustainable situation and of the need to fight tirelessly to obtain true justice, freedom, dignity and peace. It is this mortal wound that resides in the heart of power and from which it will never recover.”[8]

Scott Campbell is an organizer from the SF Bay Area currently residing in Oaxaca. All quotations were translated from the Spanish by him. He posts observations and translations of Oaxaca-related material at http://angrywhitekid.blogs.com/weblog.

1 reply on “The APPO two years on: Where now for Oaxaca’s social movement?”