Sisters, brothers, painful is the path of return to our village from which we were displaced by the rancor and hate of those who from afar send the owners of power to our region, but we know well that reconciliation can and should come to our lands. More than 500 years of resisting exploitation, repression and misery have given the indigenous of this country the wisdom necessary to resolve their problems through the word. It is because of this that the displaced communicate to those who have accompanied us that we are doing everything in our power to put into action the Triqui word. We are sure that this will help to solve our differences, that it will ensure peace always exists in our region, but we want to state very clearly that we are not asking for impunity for anyone, those who commit crimes by following the orders of the powerful should and have to pay, as our lands have been dyed with blood spilled by indigenous who have exchanged their dignity for a few coins or for promises of positions of power (in the state congress, for example) but we will speak of these individuals another time in a more detailed manner and we will do it with names and evidence.

Today we merely want to address you to tell you that we are doing everything in our power to find the path to peace through the word and we want to ask for your fraternal solidarity, which you have always shown us, so that today more than ever, the flower of the word does not die.

It is also necessary to mention that this process of returning has been delayed in part due to the wickedness of some government officials who see a benefit to their own personal interests in this conflict, or at least a means to enhance their standing using our pain. We also recognize, as it is part of our indigenous history and dignity to recognize those who act in a correct manner, that there are officials who have taken on the task of finding the way to a solution where no one’s dignity is injured and who oppose our return taking this into account and being entirely convinced that the only way to resolve our differences is through dialog. Despite the fact that on Thursday, January 26, when we left the city of Oaxaca the state government blocked the caravan of displaced families and solidarity groups on several occasions, we accepted the state of Oaxaca’s proposal that on Sunday, January 29, a group of 20 women would enter San Juan Copala to dialog with those who call themselves authorities and to convince them through the word that all the displaced may enter our village. In no way will we accept that the families return in groups of five as they suggest. Near Yosoyuxi, the site of caravan’s location, while awaiting the officials in charge of transporting the group of women, Oscar Cruz Lopez, the Deputy Secretary of Political Affairs, in an arrogant and rude manner told our representatives that the Copala authorities only agreed that there would be ten women. This created discord, but in the eagerness to move forward, it was accepted on the part of our group.

Unsatisfied, this individual who calls himself an official, ordered Cesar Alfaro, State Police Commissioner, to arbitrarily and unjustly detain our compañero in solidarity, David Venegas, in order to later tell all those present that if they wanted to enter Copala they would do so without any security because he was leaving. There is the evidence that this man had orders to lay waste to all that we had worked and agreed to on our part with the State Government Human Rights Commissioner and the Secretary of Indigenous Affairs. Since that time, many denouncements have been made by those who sympathize with our struggle, something that we look gratefully upon, but it is necessary to mention that as of this statement, the Communal Autonomous Council of San Juan Copala, which represents the displaced and the communities pushing for autonomy in the Triqui region, has not put forward its word as the conditions did not exist in order to do so. We thank those who have raised their voice in protest for us and have done so in good faith, and we say to them that this is our true word and to those, abusing our limitations, send statements in our name to alleviate their ideological frustrations, we ask them in a fraternal manner for respect and common sense, as a misinterpreted word could place in serious danger those who will live permanently in a community where wounds are very recent, but above all in a region where many criminals operate with impunity.

Finally, we inform you that in the desire to advance our struggle in a peaceful manner we accepted the reestablishment of the dialog that was put off on January 29 and that it is in this manner that an agreement with the federal and state governments will be reached. And to those who present themselves as the authorities of our village, on Saturday, February 4 at 10am the commission of ten women will enter, to dialog and search for ways to arrive at the necessary agreements to allow for return, putting above all the dignity of our movement and justice for those who tried to reach this dream of freedom and died in the attempt.

Media who wish to accompany the commission on Saturday may do so without risk; it is an agreement made by both parties with the state and federal government. 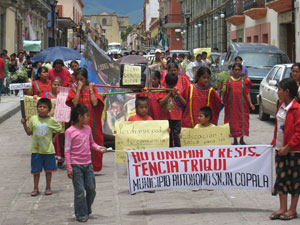 Translated by Scott Campbell from text at:
http://www.proyectoambulante.org/?p=15106