On May 6, community members who had been blocking the entrance to the mining project Cuzctalán in the municipality of San José del Progreso since March 16, were evicted by the State and Federal Police forces. Social movements and organization of Oaxaca, such as Oaxacan Voices Building Autonomy and Liberty (VOCAL), the Regional Human Rights Center “Bartolomé Carrasco Briseño” A.C. (BARCA-DH), and the Diocesan Commission for Peace and Justice, denounced the excessive use of force against the citizens demanding their right to the land, as well as the abuse and violation of the human rights of the indigenous communities.

Twelve members of the community were detained during the eviction and there was one injured policeman according to various sources. VOCAL stated in their denunciation that “according to information from those in the community, approximately 1,500 police evicted the roadblock which was demanding the definite closure of the mine, 12 people were detained (their names are not known), 4 people have arrest warrants, and 5 communities are surrounded by police at the moment.”

It is important to remember that on March 14, 600 people affected by the Canadian mining companies Fortuna Silver Inc. and Continuum Resources Ltd. by way of their Mexican subsidiary Compañía Minera Cuzcatlán, decided to organize themselves to stop the advance of these mining projects. These companies cover 54,000 hectares in the town of San Jerónimo Taviche, municipality of Ocotlán. In an assembly they asked for the support of their representatives “to protect their territory”, a request which was denied by the municipal president. Faced with this, the decision to close “the mine, in an orderly and peaceful manner” was taken and carried out by 600 people by way of a roadblock, begun on March 16. Since March 20, they denounced that the roadblock has been constantly threatened by members of the Secretary of Public Security, the Secretary of National Defense, and the State Police in various police and military operations.

Below is a statement from a Canadian human rights group and a call to action from several groups on the ground in Oaxaca, with a sample letter and email addresses to send it to. 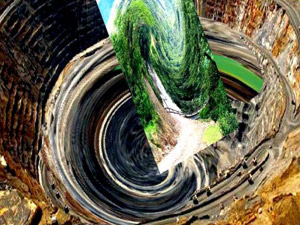 To Whom it May Concern:

We have learned that the governments of Felipe Calderón and Ulises Ruiz Ortiz have unleashed a violent repression against the indigenous communities of San José del Progreso and Magdalena Ocotlán, for their defense of the environment and their natural resources. They are opposing the establishment of the FORTUNA SILVER MINES and CUZCATLÁN, which in addition to being highly contaminating and destructive of the environment, we have been informed have begun their work without permits and papers established by laws (regarding mining).

It worries us that the Mexican government represses its people and violates human rights to benefit companies which in no way follow national laws.

For these reasons, we demand:

Hoping that you respond positively to this petition, we remain attentive to the events in San José del Progreso Ocotlán, Oaxaca. 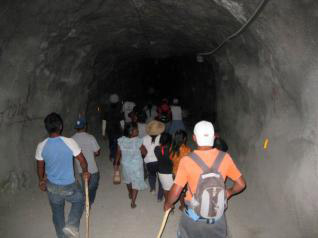 Today, Wednesday, May 6, 2009 around 8:30 in the morning, with excessive force, using tear gas, shooting various firearms, police dogs, savagely beating the compañeros and invading homes, more than 2,500 policemen of the FEDERAL, AFI, JUDICIAL, FIRE DEPARTMENT attacked those who were peacefully guarding access to the mine. Also beaten were media people who were present and whose access was blocked. From the early hours a helicopter was circling overhead at fifteen or twenty meters up, terrorizing the population.

Between 12:00 and12:30 o’clock the police circles were reinforced from all the units to break into (homes) house by house in the town of Magdalena Ocotlán and they even arrested whoever walked in the street, a situation which resulted in more than 20 detained.

The attempts at dialogue have been nil with the Secrtary of the Environment (Secretaria del Medio Ambiente, SEMARNAT) and the Secretary of the Economy (SECRETARIA DE ECONOMIA), PROFEPA, National Water Commission (COMISION NACIONAL DEL AGUA), and with the Secretary of Government (SECRETARIA DE GOBERNACION), institutions which are the ones that issue permits of agreement to an environmental impact study which the mine CUZCATLAN offers, and which should be made known to the original owners of the lands.

But there have been many deceits, lies by the company CUZCATLAN, since one sees today the federal and state government are giving total backing to the mining investments without considering the opinion of the peoples, who will be affected by the consequences of poisoning the water, soil, and atmosphere, by the noise, the destruction of the cement of the houses as a consequence of the dynamite explosions which the mining company carried out during nights. None of the actions we have pacifically carried out has been able to sensitize the authorities so that the petition of the peoples be heard. That is demonstrated by the backing that Felipe Calderón on April 21 issued on national networks and in newspapers, regarding the mining investments in México, which shows that the spurious government of Felipe Calderón has put himself on his knees before the foreign investors.

Faced with this situation we demand:

We ask the organizations and national and international persons to speak out against the repression and violation of human rights which are being committed against the indigenous people who defend the environment and their natural resources, by sending letters of repudiation to the governments of México and the state of Oaxaca, to the Mexican embassies in your respective countries, and where you have conditions to do so, demonstrating in repudiation of these actions by the spurious governments of Felipe Calderón and Ulises Ruiz Ortiz.

SINCERELY
“FOR LIFE, WE DEFEND OUR MOTHER EARTH” WORLD SOCIAL FORUM
COUNCIL OF POPULAR MUNICIPAL GOVERNMENT OF DE SAN JOSÉ DEL PROGRESO OCOTLÁN
COMMITTEE FOR DEFENSE OF HUMAN RIGHTS OF THE PEOPLE (CODEP)
COORDINATOR IN DEFENSE OF THE NATURAL RSOURCES AND OUR MOTHER EARTH OF THE VALLE DE OCOTLÁN – EJUTLA

Fortuna Silver Mines is the Canadian mining company based in (Suite #840, 355 Burrard Street, Vancouver, BC Canada V6C 2G8. http://www.fortunasilver.com. T: 604.484.4085. F: 604.484.4029) that has a mine in San Jose del Progreso, Ocotlan, Oaxaca where they have and are currently repressing the people of the community with over 2500 different police (Federal, AFI-Federal Agency of Investigation (FBI-like), Judicial) and other forces. Fortuna Silver Mines had asked the federal and state governments to find a solution to the “problem” of community opposition. The “solution” from the Oaxacan government of Ulises Ruiz and the Federal Government of Felipe Calderon is repression against the people of San Jose del Progreso.

Please take action in support of the Oaxacan and Mexican people.

From the CORPORATE BUSINESS MEDIA

VANCOUVER, BRITISH COLUMBIA–(Marketwire – April 16, 2009) – Fortuna Silver Mines Inc. (TSX VENTURE:FVI)(BVLAC:FVI) reports that a group of demonstrators, ranging from 10 to 50 persons, have illegally blocked the main access road to the San Jose del Progreso town and the Company’s project. The majority of the people involved are from outside the immediate area of the project, and the demonstrators include only a small fringe group from the San Jose del Progreso community itself.

Along with local authorities, the Company is engaged in discussions with state and federal authorities to assist in bringing about a peaceful and long term resolution to the road blockade.

On April 3rd, the “Manifiesto de Impacto Ambiental” of the project was presented to Mexican environmental authorities. Fortuna is also advancing with engineering studies for the development of the San Jose deposit including mine and processing plant design, tailings dam engineering as well as evaluating power and water supply alternatives. The Company has already secured all the land required for the project and is in the advanced stages of negotiation of a collaborative agreement with the community.

Fortuna is a growth oriented, silver and base metal producer focused on mining opportunities in Latin America. Our primary assets are the Caylloma Silver Mine in southern Peru and the San Jose Silver-Gold Project in Mexico. The Company is selectively pursuing additional acquisition opportunities. For more information, please visit our website at http://www.fortunasilver.com.

ON BEHALF OF THE BOARD

Neither the TSX Venture Exchange nor the Investment Industry Regulatory Organization of Canada accepts responsibility for the adequacy or accuracy of this release.