Bi, in the Binnizaá or Zapotec language, means “air”, means “spirit.” “For us, air not only represents life, it also carries loved ones who have died. When one dies, their spirit becomes air and returns to the people.”

The struggles against the wind farms that abound throughout the state also, then, contain this element: “They want to change the path of the wind, of the air, of our spirits, of our loved ones.”

Carlos Martínez Fuentes, a member of Radio Totopo in Juchitán, Oaxaca, is the one who explained the above. Radio Totopo, with its nine years transmitting together with the spirits in the air, also belongs to the Popular Assembly of the Juchitecan People.

The emergence of the radio was a result of sheer necessity. On the one hand, as a tool in the resistance struggle to Plan Puebla Panama, which includes the wind farm system being put into place between those two locations.

As well, because the tradition of the indigenous peoples of Oaxaca (as with most) is oral. The radio fits perfectly, then. “In Oaxaca, 16 different languages are spoken. The indigenous oral tradition is the key reason behind the existence of community radio stations and community assemblies, their main supporters,” explains José Juan Cárdenas, member of the Integral Community Communication organization.

This organization works to strengthen and promote communal means of communication, above all, facilitating community access to the technology necessary to occupy the air: radio booths, antennae, microphones, and FM transmitters (which they install).

Its 94 municipalities are governed by Internal Normative Systems, through which the communities participate in the election of their authorities, using ancestral methods specific to each locale.

“The air is part of the territory, and therefore it is one way to remain and to survive as a people.”

The Popular Assembly of the Peoples of Oaxaca

Oaxaca shook in 2006: from the teachers’ movement to the street barricades in which thousands of people and organizations of all types participated. From that ferment the first community radio station, Radio Plantón, emerged as a tool.

The rise of the Popular Assembly of the Peoples of Oaxaca (APPO) allowed the people to reclaim their voices and later, to seek to spread them. “It was through that that the people understood the importance of the media and of the necessity of taking them,” explains José Juan.

It is also the case that the Binnizaá or Zapotec peoples (as well as many others in Mexico) rely more on speech than on text. “The most successful means of communication are radio and video, we feel more comfortable receiving information through those mediums,” explains Martínez Fuentes.

In spite of its centrality to the dissemination of information, as explained in the above quote, there is no data on how many radio stations exist in Oaxaca. It is known that the use of the radio spectrum has grown like never before in the last ten years.

“If you scan the radio dial when you’re in Oaxaca, you’ll always come across a community radio station from a nearby community, although not all of them are communal, there are many commercial ones. In Tehuantepec, for example, there are twenty stations among which few are communal,” says José Juan.

Air is the center for Oaxacans. “It’s an element of mother earth, key for the survival of living beings on the earth. We began to fight for the air because it’s unthinkable that they want to privatize it.” 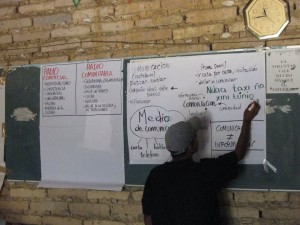 Private investment plans (and the displacement that follows) are abhorrent to the people, as understood from the land. Neftalí Reyes Méndez, from the Service for an Alternative Education (EDUCA), gave some information to that effect: “Just for the generation of electricity and the extraction of minerals they plan to put into place 60 hydroelectric dams and 40 mining projects.”

In the community of Magdalena Teitipac, they banned mining after driving out the company that was exploiting the area, as decided by the Council of Elders, the local Committee for the Defense of Territorial and Cultural Integrity, and, who else?, the community radio station Teiti Radio-Lova.

There are different forms of financing the stations. In the case of San Juan Tabaá it comes from the municipality, elected by the Internal Normative System of each community. Another way, as in the case of Santa María Yaviche, they created a foundation to sustain it. In the case of Villa Tálea de Castro it was the community itself that pitched in to get the radio going.

Radio Totopo, an example of resistance

“In 1994, national and international businesspeople appeared, trying to commercialize the air, they started putting a price on it. This was a cause for reflection by our peoples.”

Radio Totopo inherited the name of that form of consuming maize, as shared by five First Nations: Chontal, Ikoo, Ayuuk, Zoque, and Zapotec. Each has its own way of making and eating the totopo.

“Also, among us there has been discrimination, there have been conflicts. But facing that we have united in order to defend our territory, the Isthmus of Tehuantepec. One way of expressing this common nationality is to appeal to the totopo, which represents cultural diversity as well as unity among the nations of southern Oaxaca and Veracruz,” says Carlos Fuentes. “We took the name Totopo to unite the people.”

Businesspeople and some anthropologists attack the community stations, saying their argument has no scientific basis, that there is no way to prove that there are spirits in the air. “It is part of our cosmovision, which we have preserved for thousands of years, we don’t have to support it scientifically,” he adds.

Since 2012, the Ikoos and Zapotecs have united to confront the company “Eólicas del Sur” (formerly Mareña Renovables), responsible now for trying to extend wind farm projects into the urban area of Juchitán. 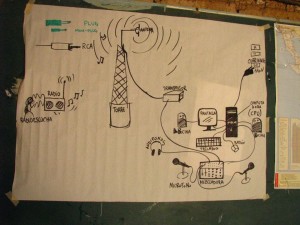 Integral Community Communication is not the only organization which promotes (through training people) these kinds of radio stations in Oaxaca. Ojo de Agua, Palabra Radio and Acción Comunitaria do as well.

They warn that lack of knowledge can sometimes cause communities to break their equipment, “as they don’t know how to get it started, but it’s also not their fault for not knowing.”

They give some suggestions: