Originally posted to It’s Going Down
May 30, 2016
By Scott Campbell

The last edition of Insumisión started with news of the national teachers strike in Mexico and that’s where we’ll kick things off here. It’s been an intense fifteen days since the National Coordinating Body of Education Workers (CNTE) began an indefinite strike on May 15, primarily against plans by Mexican President Enrique Peña Nieto to implement neoliberal reforms to the country’s education system.

Since being selected as president in 2012, Peña Nieto has attempted to privatize and standardize the Mexican education system, along with instituting policies to disempower Latin America’s largest union, the National Union of Education Workers (SNTE), and its dissident and more radical faction, the CNTE. In 2013, the CNTE mobilized its base to fight back against similar reform efforts. An article I wrote then gives some context to the developments occurring now, as well as clarifying the distinctions between the SNTE, the CNTE, and their relationships to the state.

The current strike is strongest in Mexico City, Oaxaca and Chiapas. On May 15, which is Teachers’ Day in Mexico, 20,000 teachers marched to the Interior Ministry (SEGOB) in Mexico City and several hundred installed a plantón, a massive encampment, on its doorstep. Ever since, the union and the federal police have been playing an elaborate and slow-motion game of cat and mouse in Mexico City. At 2am on May 20, hundreds of federal police rousted the teachers, demanding they leave. Outnumbered, the teachers moved their plantón to Santo Domingo Plaza, where a day later police showed up again at 2am, this time with buses, and notifying the teachers that many of them had arrest warrants out against them, they “invited” them to remove the plantón and get on the bus with the name of their state to be driven home. The teachers said “thanks, but no thanks,” to the ride and instead moved the plantón to Ciudadela Plaza, then for a day back to the SEGOB, then back to Ciudadela, where it is currently located. 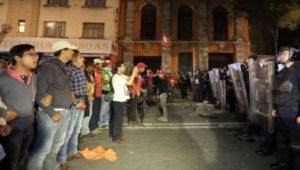 At the moment, the conflict is in a holding pattern of sorts, with each side remaining firmly entrenched in their positions while making limited shows of force, hoping that eventually the opponent will blink first. The CNTE operates under the framework that at some point it will have to negotiate with the state, if not during this strike then in future years, and wants to ensure it maintains enough clout and respectability to do so effectively. For its part, the government is aware that it has the military capability to physically remove the teachers from public spaces, but also that it is under increased scrutiny internationally and domestically since the Ayotzinapa disappearances and the universal condemnation of its handling of that act of state terror. And ten years ago, when one state government tried to crush a teachers strike, it led to a five-month uprising known as the Oaxaca Commune. The fallout of conducting a multi-state operation along those same lines is more than the government is willing to risk at this stage. (For a look back at the Oaxaca Commune and an excellent interview with a striking teacher from Oaxaca, check out subMedia’s latest episode.) That could all change quickly, however, as the only negotiations the Mexican state knows how to conduct, in particular the government of Peña Nieto, is through the barrel of a gun – a reality I examined in an article back in February.

In lieu of outright confrontation (with the exception of Chiapas), the state has refused to even meet with the teachers. The Interior Minister and Education Minister both say there is nothing to discuss, while Peña Nieto said he’ll sit down for negotiations only after the teachers accept the educational reform. The government has frozen the CNTE’s bank accounts, meaning teachers are not getting paid and loans, which many teachers acquire through their union, are not being processed or disbursed. Aurelio Nuño, the Education Minister, announced that any teacher missing three days in a row of work will be fired, and so far has announced the dismissal of 3,119 teachers from Oaxaca, Guerrero and Michoacán. Along with harassing and threatening teachers in Mexico City, police have also been blocking and turning back buses of teachers attempting to enter the city to join their comrades. In Chiapas, teachers’ marches on May 19 and May 25 were attacked by police firing tear gas and rubber bullets from the ground and helicopters.

While the state has the guns, the teachers have the numbers, and they’ve been using them. Massive marches have been held in Mexico City, Oaxaca and Chiapas. Following the May 19 repression, as well as earlier repression in April, 200,000 came out to protest in Chiapas on May 23. This was followed up by a megamarch in the state capital of Tuxtla Gutiérrez on May 27, with coinciding marches in 30 municipalities. During the march in the capital, teachers briefly took over eight different media outlets, getting on the air to directly communicate with the people. As well, parents’ committees from 82 of Chiapas’ 122 municipalities announced they are joining forces with the teachers. This is up from the parents in 60 municipalities who last week pledged to shut down any school that attempts to open with scab teachers. When the strike started, a spokesperson for the CNTE in Chiapas vowed that for each teacher arrested, the union would detain a government official and hold them in the central plaza of Tuxtla Gutiérrez. Eight protesters were arrested during clashes on May 25 and charged with a litany of serious offenses, only to be promptly released before the marches on May 27.

In Oaxaca, Governor Gabino Cué said he had hundreds of police at the ready to remove any plantón or blockade installed by the teachers. The CNTE went ahead an installed them anyway, calling Cué’s bluff (for now). On May 27, they blockaded access to the state’s international airport for eight hours, as well as the highway connecting the city of Oaxaca with the tourist destination of Puerto Escondido. After the federal police showed up at the airport and ordered them to disperse, a group of teachers managed to sneak around police lines and encircle a bus carrying police reinforcements. The teachers refused to let them go until the police stood down. Meanwhile, the head of the CNTE in Oaxaca, Rubén Núñez, warned the governor that, “If there is no dialog, there will be no elections.” Elections are slated for June 5. 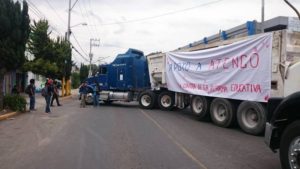 A key to the success of the strike will not only be the ability of the CNTE to sustain its momentum, but to expand its base of support. Despite the mainstream media’s abject loyalty to the Mexican state and its narrative, the CNTE has been able to do just that. In part, this is due to the fact that the CNTE’s demands extend beyond wages and reforms and encompass broader social, economic and political issues, such as freedom for all political prisoners and prisoners of conscience, increased investment in education, truth and justice for Ayotzinapa and against neoliberal reforms in general. The strike has spread from Oaxaca, Chiapas, and Mexico City, to Guerrero, Veracruz, Mexico State, and Michoacán. Like in Chiapas, 300 representatives of parents’ organizations came out in support of striking teachers in Guerrero on Friday. Commemorating 20 months since the disappearance of their children, the families of the students from Ayotzinapa marched in support of the teachers in Mexico City on May 26. On May 27, the Peoples’ Front in Defense of the Land (FPDT) from Atenco announced their backing of the CNTE strike. While on May 16, students from Chapingo Autonomous University in Texcoco, Mexico State, borrowed some buses and tractor-trailers and blockaded a main road in support of the strike, the ongoing student struggle at the National Polytechnic Institute (IPN), and against the recent incursion of hundreds of police into Atenco to facilitate the construction of a new international airport. Even the Autonomous University of Mexico City’s University Council proclaimed all striking teachers will be accorded the status of Distinguished Guest should they visit the school.

As for what comes next, the teachers have promised more protests and mobilizations, including a plan to march on Mexico City’s International Airport on Friday, June 3. The state is likely planning to hold off on any major move against the teachers until after the June 5 elections. Regardless, even a small spark could elevate an already tense situation to another level.

While most of this edition has been focused on the strike, there is of course a lot more happening in Mexico, some of which I’ll cover briefly here. Mexico lost its sixth journalist of the year when Manuel Torres was killed in his home in Veracruz on May 14. Torres is the 18th journalist to be murdered in Veracruz during the rule of Governor Javier Duarte. Also in Veracruz, students and staff at Veracruz University are considering a general strike to force the Duarte regime to pay the 2.5 billion pesos it owes the school. May 18-30 saw events nationwide as part of the International Week of the Detained-Disappeared. Yesterday in Toluca, Mexico State, the Fire of Dignified Resistance hosted the First Popular Encounter against the Eruviel Law – the recently passed legislation allowing Mexico State Police to use live ammunition against gatherings and protests. And around Mexico, 215 communities from 17 states have signed onto the National Campaign in Defense of Mother Earth and Territory. One of those communities is Coyotepec, in Mexico State, which for years has autonomously administered its water supply and resisted efforts to privatize it. Last week, six of its members were detained and the community was besieged by 600 riot police. In response, thousands came out to demand their release and the removal of the police. A day later the police left, but the six remain in state custody.

Lastly, in memory of Chilean anarchist Mauricio Morales, vehicles belonging to the National Migration Institute were torched in Cancún and a squatted social center bearing Mauricio’s name opened its doors in Tijuana.